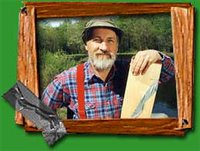 That internationally renown leader of men and jury-rig inventor extraordinaire, Red Green, (aka Steve Smith), has been invested in the Order of Canada by Governor General Michaëlle Jean, at a ceremony in Ottawa yesterday.

Steve is responsible for putting Possum Lodge on the map and convincing men that they might just have to change. He is also the inventor of some of the worlds most useful gadgets such as a parallel parking machine which lifts a car into a tight space and a family-sized bread-maker made from an old automatic washing machine.

The thing that makes him famous though is how he demonstrated the unbelievable usefulness of duct tape, something that was adopted by the US Department of Homeland Security as a primary defence against terrorist attacks. (He denies having sold USDHS the rights to their colour coded alert system and points out that if it had been his idea, "plaid" would be the highest alert level.)

Well done, Steve! It couldn't happen to a better guy. Keep your stick on the ice.
Posted by Dave at 15:11 Recommend this Post