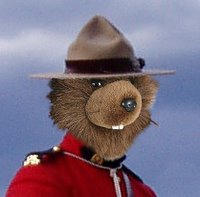 The Wingnuterer has revealed that we have received a phone call from Prime Minister Stevie Harpoon offering one of us an appointment as Minister of Unicorns. Apparently, despite us having once had Rhinocerous leanings, Harpie's selection is based on what is ultimately best for Canada and the fact that we were aware of the unforgiveable neglect this position has had in the past. Our thanks go out to The Wingnuterer for his tireless lobbying in securing us this appointment. (The cheque is in the mail, by the way, and there's no need to worry about your status as a lobbyist since the rules aren't in place yet and even when they are they only apply to the other side.)

The appointment is causing some considerable marital discord since it appears either one of us may assume the post. I am claiming "top beaver" status then Cheryl flips it all around saying she is the beaver on top and I am nothing but a unicorn's ass. Right now we are endeavouring to resolve which one of us is able to wear the ceremonial uniform and which of us would be able to spare the necessary 6 months to work in a wingnut cabinet. Of course, there is a Senate seat which goes with the job and which will outlast any cabinet post. (This is a good thing since, whichever one of us takes the seat, we are ultimately there for the indexed, gold-plated pension and whatever take-out is available from the parliamentary dining room.)

Despite the fact that we campaigned against the wingnuts, we feel there is no ethical issue here and that being unelected, with no intention of ever letting the voters have at us, clears any possible conflict that could arise from having a bunch of pesky constituents. For this reason, we will not be polling commenters for their suggestions on this matter, although feel free to leave notes of praise and adoration.

We, (whichever of us), are honoured to be chosen to further represent British Columbia, particularly the denizens of Wreck Beach and the burgeoning population of the west coast of Vancouver Island, at the federal cabinet table.

I say, does anybody have any Grey Poupon? And please pass the pork.

Thanks to Zorpheous for the graphic.
Posted by Dave at 13:07 Recommend this Post