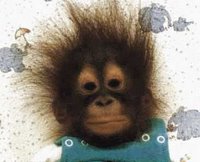 Scott in Montreal (no, that's NOT a picture of him!) decided that I needed to raise my weary head from the Income Tax Act (god I hate tax season!!!) and briefly rejoin the human race. So he tagged me. And woke me up from a perfectly good sleep. May his tax return languish in the bowels of CCRA!
So here goes.

4 vehicles I’ve owned:
You’re not going to believe this, but I’ve only ever owned one car in my life – a 1990 Ford Tempo. It’s old and not the prettiest thing there is, but the little sucker is like the Energizer Bunny – it just keeps going and going and going. I do have a pretty nifty 6-speed bike that keeps my body injury count way up there. I had a pair of rollerskates as a kid that was a ton of fun. But the absolute best form of transportation I ever had was a metal 6-man toboggan that we kids would pile 10 people on and then go for the world’s wildest ride down the local Suicide Hill (broken bones were an accepted payoff for the thrill of the ride)


Now it’s back to the grind!
Posted by Cheryl at 18:55 Recommend this Post