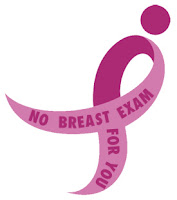 If it's got a pink ribbon on it, I'm not buying it. Simple.


As TBogg points out, the upper end of the Susan G Komen foundation had to know that THIS bombshell was being released in the same week at they issued a press release severing their breast cancer funding from Planned Parenthood. And, as he asks, is that hubris or stupidity?

Run for the cure? Apparently the mega-charity holding the trademark rights on that line (in the US) doesn't really give a damn about the cure part, especially since they've been hijacked by the religiously-driven woman-haters.

Agreed. I'm now glad I hate pink so much, because it prevented me from buying Komen crap.