I tend to agree with pogge. There is nothing that has been posted on Twitter about Vic Toews that wasn't already a matter of public record. His demand for an investigation, (and the releasing of the Harper party's howler monkey in residence, John Baird), is nothing more than an attempt to distract people from the real issue - Toews does and has demonstrated a complete disregard for the rights of Canadian citizens.

In short, Toews is a typical conservative authoritarian. He won't be happy until you're all curled up in a ball and he's putting the boots to you.

The point, however, is the crap produced by the Ottawa Citizen.


An IP address connected to what is known as the Vikileaks30 Twitter account originates within the House of Commons.
In a bid to determine the origin of the account, which details personal information about Public Safety Minister Vic Toews, The Citizen undertook an investigation on Thursday.
An email was sent to the writer of the Vikileaks30 Twitter account, containing a link to a website. The website was monitored by The Citizen and only the author of Vikileaks30 had the address of the website.
About 15 minutes after the email was sent, Vikileaks30 opened the link and visited the page, leaving behind an IP address that belongs to the House of Commons.

Well, that little process proves four-fifths of just about fuck-all.

For a detailed explanation of what the Ottawa Citizen's ridiculous little exercise actually produced ... we have Catelli. It's important that you read that because if you don't, you might continue to buy into the BS flowing from the Ottawa Citizen.

Any investigation capable of producing a result would have to involve interviewing everyone whose traffic flows through a common server farm. Good luck with that.

And just as a demonstration, this kind of thing shows up on this site about 30 times per day from the House of Commons. 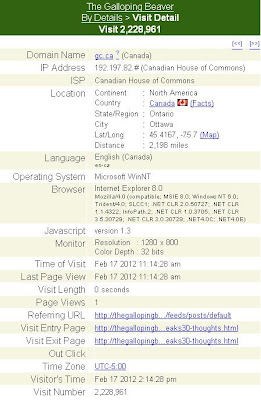 Oh yeah. What Boris said.
Posted by Dave at 13:27 Recommend this Post

So, in addition to child pornographers, insulters of Imam Toews are also subject to the Internet Registry?

I am impressed though, there must be thousands of computers on Parliament Hill, and not one, not one has been rooted and made into a proxy.