It Ain't Over Till The Pink Plunger Sets Off The Detonator 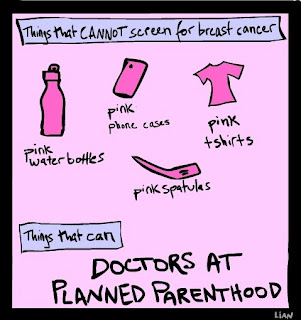 
Let's not get ahead of ourselves — Karen Handel hasn't resigned (yet), but as pressure for her to quit grows, it seems like odd timing for the organization to post an ad that looks a lot like it's an ad to fill the embattled Senior Vice President of Public Policy's shoes. The ad is for a Director of Public Policy — are we just mincing labels here? Director, Senior Vice President — tomato, tomahto.

Personally, I've always been one in favour of the captain assuming responsibility for sinking the ship and in this case that means Nancy G. Brinker should be watching the lifeboats pull away without her. She's the founder; she chairs the board; she allowed Karen Handel to turn Susan G. Komen for the Cure into a political organization with wingnut mission.

That makes this visit to George W. Bush's alma mater that much more interesting. (We'll give 'W' a few seconds to look it up).


The decision is in — Nancy G. Brinker, the founder and chief executive of Susan G. Komen for the Cure, will speak at the School of Public Health's Commencement, after all.

What's a little political scandal to the Ivy League university who granted an honorary degree to one of their Revolutionary War enemies?

At least the dean and department chairs of the Yale School of Public Health can be confident that their guest speaker will arrive rested and refreshed.  They can all sip blue cocktails and discuss the horrible state of the canapés in the first-class lounge.
Posted by Dave at 16:46 Recommend this Post