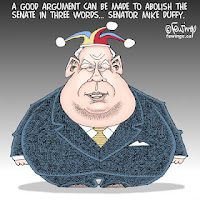 Conservative Senator Mike Duffy says “third parties” – and not necessarily any of the political parties – could be behind election “robo-call” scandal that’s become a full-blown headache for Stephen Harper’s Conservatives.

Mr. Duffy offered up his theory in the blame game over a spate of May 2 phone-calls misdirecting voters in an interview with morning host Jordi Morgan on Halifax radio station News 95.7 Monday morning.

I first encountered Duffy some decades ago in Ottawa at the Mayflower. He rather rudely interrupted our group of  about a half-dozen senior sailors, in uniform, by asking what we were doing there and stating that he'd never seen us there before.

None of us had enjoyed a particularly good day and to a man we were in an ugly mood. One of our number told Duffy to fuck off. It wasn't me.

Go back to the free food, Duffy. You are absolutely full of shit.

I remember seeing him at the Mayflower numerous times in the late 80s - acting all DIVAish. Hmmm, if I recall, there is pretty nice officers mess around the corner from there.

He really is an incredible piece of work.

Given the state of the group when I first encountered him, the reason we were in Ottawa and the training from which we had just returned, I'm surprised he got away from us without having his teeth jammed down his throat.

Yes, there is a pretty nice officers mess nearby. We were of a mind that we wouldn't have made good company with that crowd that night. Just one of those days.