PROGRESS COMES from many sources; it's also an uneven process, a sudden jump from one plateau of capability to another. Countless invisible improvements and discoveries make the jump happen. It seems that by 2020 or shortly thereafter, the Moon is going to be mined for water, helium, rare elements and anything else that's profitable.

Pie-in-the-sky? Not any more, not with the robo-tech that's starting to emerge. That tech makes getting at the water doable, and water means environmental replenishment and fuel creation — and that makes everything else doable.

CTV NEWS has a report by Peter Rakobowchuk, at The Canadian Press, "Mining the moon: Canada's possible new role in space" that is worth considering. Apparently there is a meeting of the ISS consortium in Quebec City next week, to discuss this next step.

Industry insiders will be watching closely this week as the heads of the world's five biggest space agencies get together in Quebec City, where the partners on the International Space Station will discuss more than just the future of the orbiting lab.

They will also address an idea gaining currency in business and scientific circles: that within human reach lies an unfathomable wealth of resources, some of them common on Earth and others so exotic that they could change the way we live.

The United States is now focusing its attention on developing a heavy-lifting rocket known as the SLS, which will replace the shuttle program, but Colaprete says it isn't due to launch until 2017. The SLS, or Space Launch System, is a heavy-launch vehicle being designed by NASA and is expected to be the means of transportation for the RESOLVE payload.

That means the soonest there could be a rover driving around on the moon with RESOLVE is likely around the end of the decade, if all goes well with SLS.

"I think you can say certainly something could occur within a decade -- where we're driving on the moon, finding exactly where the water is, and sampling and tasting it, so to speak," 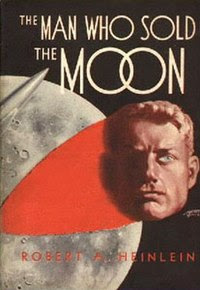 Why should you care? Thanks to Canadian technology, your grandchildren could have interesting job prospects by 2050 — if we can keep Stevie from gutting Canadian science, we can share in this. No fooling — the water is the key, because not only for the water and oxygen for environmental systems, but fuel for the cargo return rockets, which have only the weak gravitational pull of the Moon to overcome. As that capability grows, it will be cheaper to send materials from the Moon to LEO (Low-Earth-Orbit) to supply orbital industries with essentials.

Incidentally, 2050 will be the centennial of the publication of Robert Heinlein's "The Man Who Sold the Moon", a tale of D.D. Harriman's obsession with lunar exploitation. The oeuvre is a great read, but the novel is of interest because it is the first time anybody gave serious thought as to who owns the Moon. Bob would follow this up with "The Moon Is a Harsh Mistress" some fifteen years later, where permanent settlers on the Moon decide they should be independent. As well, "Stranger in a Strange Land" also pondered ownership, this time of the planet Mars.

I know, when you're up to your ass in Stevieweasels, it's hard to look 50 years ahead, but decisions made in Canada in the next 4-5 years will be of consequence in this future.
Posted by Edstock at 13:16 Recommend this Post