I wield my scimitar through the fields of dragon dung 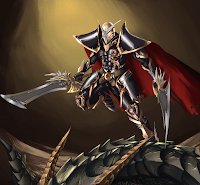 And Preston Manning, because Latin doesn't seem to be his strong suit, makes up words to go with his gut-gripping fiction.


We Canadians have many virtues, but we also have our faults. One of the most worrisome is our growing tendency to substitute discussion for action on key public issues such as health-care reform, productivity improvement and energy policy.

We increasingly seem to think that a major issue is being “dealt with” when someone writes a paper, article, report or book about it. Further “progress” is then measured by the extent to which the paper, article, report or book has been peer-reviewed, conferenced, editorialized, blogged and tweeted, with the original discussants linked in and befriended by an ever-growing number of fellow discussants via the Internet.

Which Manning finds objectionable. Better to employ the Conservative modus operandi by not bothering to gather facts, study anything or read statistics before rushing headlong into the ideological abyss.


But who’s going to do something about what’s being discussed or proposed? Where’s the acceptance of responsibility to act on what has been proposed and discussed? Where’s the implementation plan and to-do list that translates interest, concern and discussion into actions that achieve results?

Good point. Clearly we're not getting it out of Harper. He and his herd of hillbillies ignore all of that in search of their conservative utopia.

(If you didn't know this was coming you haven't been keeping much of an eye on the Manning conservative puppy-mill).


The federal government’s willingness to provide “no strings attached” health-care transfers to the provinces ought to open the door to systemic innovation. But, as yet, no province has produced an action plan equivalent to what Saskatchewan developed in the 1960s to lay the foundations of the current system, nor has any coalition of health-care reformers emerged in any province to move public opinion onto health-care reform ground such that the politicians will follow. On health-care reform, it’s still talk, talk, talk and no action.

Now there's a different way of viewing events. Flaherty, a refugee from the Mike Harris disaster, shows up in Victoria on the pretext of entering negotiations (that would be action by the way) and blindsides provincial premiers with a no-discussion dictum and you wonder why they're still reeling.


I’m amazed when even some of my private-enterprise friends and acquaintances take the Leave It to Beaver approach. We give ringing speeches on the virtues of private enterprise and letting the markets solve problems, free of heavy-handed government intervention. Yet, when a challenge such as improving productivity or devising a Canadian energy strategy arises, far too often the reports we present to governments consist primarily of pleas for the government to do this or that.

That's because your free-enterprise friends, or more correctly your corporate donors, are little more than welfare queens. But maybe you're right. Clearly cutting their corporate income tax didn't get them off their collective asses.


Don’t get me wrong. There’s a place for discussing the great issues of the day.

You just said there wasn't. But I'm getting an idea.


Canada itself was born out of a conference of colonial politicians held in Charlottetown in 1864. But when it ended, the Fathers of Confederation went out and did something. They drafted a constitution, united the colonial economies, bought Rupert’s Land from the Hudson’s Bay Co. and built the longest railway in the world. They translated discussion into action on a magnificent scale.

Wow! Just like that! One day a bunch of politicians just got out of bed, realized there was no snow on the ground and created a country. That would be amazing if it was even the slightest bit true.

Blow away the Manning vacuum and you see that it took the better part of several decades of turmoil and discussion before the Charlottetown conference ever happened. It may be different where you went to school, but I seem to recall from high-school that most of this idea of establishing a Dominion started with the 1837 - 1838 Rebellions. And let's not forget the fact that William Lyon Mackenzie proclaimed a republic in Upper Canada a short time before Robert Nelson did the same thing in Lower Canada. Britain didn't even grant the combined colonies of Canada responsible government until 1848 because a corrupt minority of conservative leaders refused to acquiesce to the will of the people.

In short, Preston, it took a series of evolutionary reforms for Canada to be born. Unlike your chia pet version of national creation the actual road to nationhood took well over 40 years of debate, discussion and insurrection to reach what happened in Charlottetown.

I mentioned that I was getting an idea that could easily be put into action. Let's re-categorize one-sided political boot camps like yours and remove the not-for-profit tax status. Let's see what happens when you've got to pay full freight and your donors don't get a tax receipt.

Doesn't Preston believe God created everything in six days? With that mindset, it makes perfect sense to think confederation happened in the blink of an eye. Facts and history are just annoying trivia.

Right. Formal education was just a diversion until Sunday school rolled around. :)