Wow! That was close.

As a career in the merchant marine evolves one has a tendency to spend less time in ships and a greater amount of time in either administration or as an instructor for the next generation of ship's officers.

Mine has gone the latter route. What that means is that I will probably only relieve as a senior officer for short periods during the summer and I probably won't end up doing an Alaska run. Not that I mind, but now, given the ships in which I have served and the companies for which I work, I avoided this by a very slim margin. 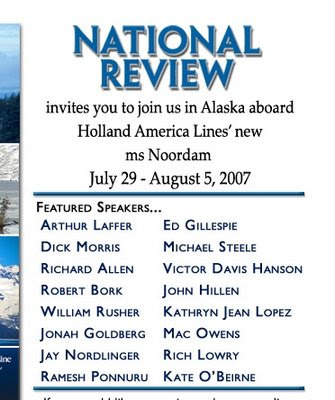 D over at LGM will be in Juneau to lighten up their lives, however and I... well, I think a little email to some appropriate contacts might result in some creative napkin folding at dinner. Victor Davis Hanson with a bra on his head comes to mind.

Further: I don't want to wish too much on the other ship's passengers, but a good shit-kicking gale in Dixon Entrance would be a nice touch.

Update: As Boris points out in comments, the link to the speakers list now includes John Bolton. You might want to wear welders glasses when you click the link.
Posted by Dave at 13:27 Recommend this Post

Email ThisBlogThis!Share to TwitterShare to FacebookShare to Pinterest
Labels: a gathering of turkeys, NRO, ship of fools