Another weekend, another barbecue
Dave said I could post weird stuff, so I thought I'd blog about my weekend, most just so I could post an odd photo. I took the curvaceous and emminently capable Ms. Rev. Paperboy and the youngin' up into the mountains of Yamanashi Prefecture this weekend to camp out on a mountain top at The Northlands campground with 50 of our closest friends from my old watering hole in Kawasaki, Moby Dick, (named for the drum solo, not the whale) the friendliest bar in Japan, if not the world.

To paraphrase the master (and this is the real list): "We had 5 cases of Heineken, 2 bottles of Captain Morgan's dark rum, 2 bottles of Blanton's Single Barrel bourbon, a bottle of Black Bush, 2 bottles of Beefeater, 2 bottles of Jose Cuervo Gold, a bottle of Bacardi white rum, 5 litres of red wine, 5 litres of white wine, a bottle of Glenlivet, a bottle of Kalua, a bottle of Amaretto, a bottle of cassis, ten litres of assorted sake, a half dozen different kinds of sho-chu, 5 kilos of Rev. Paperboy's homemade spicy Italian sausage, 3 kilos of chicken, 4 kilos of assorted beef, 2 tuna heads, a dozen baguettes, a broad assortment of salads, pickles, olives, cheeses, chocolates, 'smores and 6 litres of Take-san's fabulous vegetable-chicken-sausage soup.
The only thing that worried me was the tuna heads. There is nothing more helpless and irresponsible than a man drunk on sake in the depths of a tuna binge." 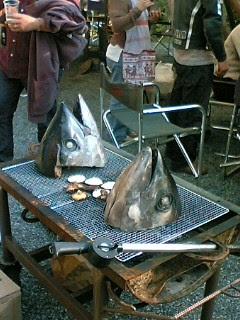 I'm not claiming we drank all the aforementioned booze - though I think I had the last beer the next morning - but we certainly put a dent in it. I know we went through about half of the Irish whisky just er...toasting my sausage -- which isn't nearly as dirty as it sounds.

(further details at the Woodshed)
Posted by Rev.Paperboy at 16:37 Recommend this Post