It's seems Canadians are lighter on their feet. 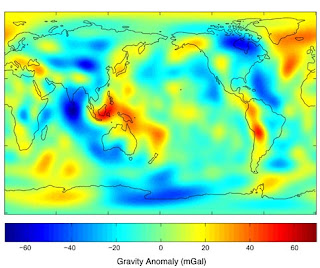 NASA and the German Aerospace Centre have been conducting an Earth observation survey known as the Gravity Recovery and Climate Experiment (GRACE). They have discovered something interesting. From New Scientist:

If it seems Canadians weigh less than their American neighbours, they do – but not for the reasons you might think. A large swath of Canada actually boasts lower gravity than its surroundings.

Researchers have puzzled for years over whether this was due to the crust there rebounding slowly after the end of the last ice age or a deeper issue involving convection in the Earth's mantle – or some combination of the two.

Now, ultra-precise measurements taken over four years by a pair of satellites known as GRACE (Gravity Recovery and Climate Experiment) reveal that each effect is equally responsible for Canada's low gravity. The work could shed light on how continents form and evolve over time.

GRACE, a joint mission of NASA and the German Aerospace Center, was launched into space in 2002. The two spacecraft fly 500 kilometres above the Earth, 220 kilometres apart. Using a microwave ranging system, the two spacecraft can measure distance differences between them as tiny as a micron.

That allows them to measure tiny changes in the distribution of mass – and hence gravity – on the Earth. For example, if the leading spacecraft were to encounter an area with more gravity, it would be pulled ever-so-slightly closer to Earth than the trailing spacecraft, and that distance can be measured.

It's an interesting read. You can also check out the mission sites. The German DLR site; The University of Texas at Austin, and The Harvard-Smithsonian Center for Astrophysics.