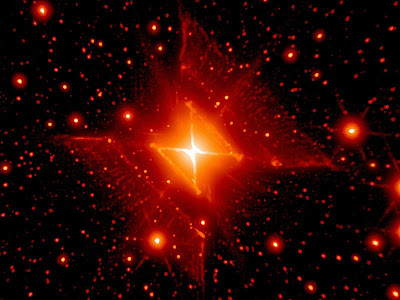 Infrared cameras at two observatories recently took this composite image of the Red Square Nebula, a rare cloud of dust and gas so symmetrical that a scientist deemed it "almost perfect."

Few other such nebula have been detected—among them the Red Rectangle Nebula in the constellation Monoceros -but what causes the phenomena has been poorly understood.

Scientists say the new image shows the to be a bipolar nebula, with stellar winds blowing cone-shaped jets away from its hot central star.

The cloud's extreme symmetry also suggests that the star, known as MWC 922, is in a relatively calm corner of space, with little turbulence to disturb the formation.

Similar forces are probably what shaped the Red Rectangle, astronomers say, and there may be many more of these formations in space than had previously been believed.