The only reconstruction that seems to count

A little over a year ago, we reported this and this about the reconstruction in Iraq. Here are some nice pictures (AP photos) which show the progress. 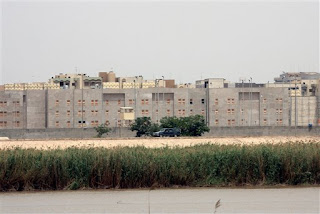 Progress... no? Of course it is. And as Ann Gearan reports:

The 21-building complex on the Tigris River was envisioned three years ago partly as a headquarters for the democratic expansion in the Middle East that President Bush identified as the organizing principle for foreign policy in his second term.

The complex quickly could become a white elephant if the U.S. scales back its presence and ambitions in Iraq. Although the U.S. probably will have forces in Iraq for years to come, it is not clear how much of the traditional work of diplomacy can proceed amid the violence and what the future holds for Iraq's government.

"What you have is a situation in which they are building an embassy without really thinking about what its functions are," said Edward Peck, a former top U.S. diplomat in Iraq.

"What kind of embassy is it when everybody lives inside and it's blast-proof, and people are running around with helmets and crouching behind sandbags?"

The Bush administration did something without thinking ahead?! Go figure.

This was to be the Bush administration's palace in the east. A testament to the wisdom of PNAC. But if it's anything it is proof that the US plan is to stay forever. The Iraqis can pass legislation, they can send petitions and they can try to pry the Americans loose with 7.62 ammunition. This building is the legacy of the Bush administration in Iraq.

Email ThisBlogThis!Share to TwitterShare to FacebookShare to Pinterest
Labels: iraq, us embassy baghdad