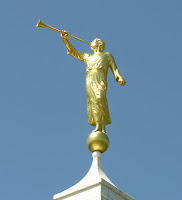 That, is a religious icon of the Church of Jesus Christ of the Latter Day Saints, (Mormons). It is a depiction of the angel Moroni who, according to Joseph Smith, Jr., appeared during the night of 21 September, 1823. There is no indication that Smith had been eating mushrooms earlier in the evening. Moroni, according to Smith, appeared around 20 times in the next six years. Still, no mention of mushrooms in Smith's testimony.

For a coffee shop, T-shirts of a Mormon angel with java flowing into his trumpet are selling well. But they don't have the blessing of religious leaders.

The shirts have upset the Church of Jesus Christ of Latter-day Saints. Not only is the angel Moroni a revered figure -- Mormons believe he appeared to church founder Joseph Smith -- but church members are discouraged from drinking coffee.

The shirts show Moroni, a male figure in a robe blowing a trumpet. The trumpet is turned up at an angle as coffee is poured in.

The church informed Beazer that the angel's image is a registered trademark.

How can a religious group take a mythical image, (which the believers believe is real), which the LDS say represents the angel revealed in Revelations 14: 6 and register it as a trademark? That's, you know, like a marketing thing. As in a "business".