1st take. The Budget Speech (And how ignoring a little beetle is going to be expensive)

On second thought, it's not splitting hairs at all. Flaherty had plenty of time to put his budget speech together and he blew it. It goes to the same kind of due diligence and care in choosing words that his colleague in the Department of National Defence exercises.

This country is made up of 10 provinces and three territories - from sea to sea to sea. Unless you believe Jim Flaherty.

... we take pride in the spectacular beauty of our country, and aspire to preserve it.

Well, most of it.

From the majestic peaks of the Rocky Mountains to the rugged shores of Newfoundland and Labrador, many of the most beautiful places on earth are in Canada.

No shit! Getthefuckouttahere! Who knew?! I could have sworn British Columbia joined a confederated Canada in 1871, but maybe my freakin' history teacher got it wrong. And the motto A Mari Usque Ad Mare (From Sea To Sea) must be someplace other than a Canada which includes British Columbia because by Flaherty's definition Canada is A Mons Montis Usque Ad Mare (From Mountains To Sea).
(Click on maps for larger image.)

Maybe it's just that Flaherty, with limited knowledge of anything west of Winnipeg figures that whenever he's seeing a picture of Vancouver, the pictures in the 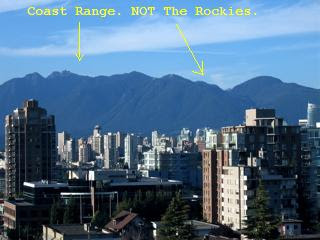 background must be the Rocky Mountains.

Well, Jimbo, BC has a lot of mountain ranges. The Coast Range, the Cascades, the Cassiars, the Skeenas, the Hazeltons, the Omenicas, the Monashees, the Selkirks, the Purcells, the Columbias and, yes, some portions of the Rockies are actually in BC. And that isn't all of them.


Was it a mistake on Flaherty's part?

How fortunate we are to call this vast, beautiful country our home. We must preserve and protect it.

Apparently not. As the little weasel was shoveling money off the back of a truck trying to secure votes in the rest of the country he didn't bother to even acknowledge the worst natural and economic disaster to hit British Columbia, ever. 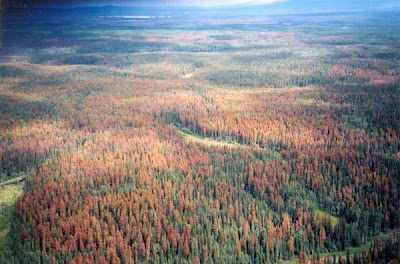 THAT is a dead pine forest in the BC southern interior. It's WEST of the Rocky Mountains. Any tree that has even a hint of red in it is dead. That makes it an incredible piece of dry fuel. Worse, it doesn't suck up water during the winter thaw, so you can guess where that goes. 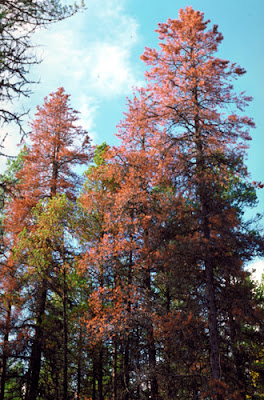 This is a close-up.

British Columbia is poised to lose, completely, its pine forestry. Great swaths of the province are red from entire forests of dying pine trees. All due to the Northern Pine Beetle. Before the Conservatives came to power, they were calling it a disaster of the highest magnitude. Now that they form government, those trees are all on the wrong side of the Rockies.

Aside from providing no funding to cities, Flaherty provided nothing to British Columbia to deal with the devastation caused by pine-beetle killed forests. Not a penny.

Flaherty did provide funding to preserve the Great Bear Rainforest. He probably doesn't know where that is. It's really west of the Rockies. If you look on any map prior to 1995 you won't find it. Before that it was just the temperate rainforest of the central BC coast. Most of the trees are reasonably healthy there. The announcement of $30 million to help preserve the temperate rainforest of the central coast is not new. That amount was announced January 21st.

So, while perusing the budget plan to see if there's anything in there that doesn't look like Flaherty was simply trying to buy votes, BC will once again be able to claim "western alienation" by the federal government. A government made up of a party that arose because of so-called "western alienation".

Since the budget only covers from the Rockies to the Atlantic, the Conservatives can feel free to take their 17 MPs and depart. They were all pretty useless anyway, and BC would probably do a lot better without the likes of Stockwell Day and Betty Hinton.

And while we're at it, and Flaherty is groveling to the government of the Province of British Columbia as they angrily rip him to shreds, he might want to consider what those thousands upon thousands of dead trees are about to cause.

The snow pack in the mountains, all of them, including the western slope of the Rockies, is at 125% above normal. In areas where the forest have been clear cut to get rid of the fire hazard there is no more erosion control and no more shade to regulate the snow melt. It will come down fast and hard. Estimates are that 90% more water will flow to the rivers 20 days earlier than normal. In areas where the trees are still standing, the flood levels are expected to be 60% larger, 14 days earlier than usual. Dead trees don't absorb any water at all so, instead of being a natural diversion of millions of gallons of water, it will simply flow to the rivers, and they will probably top the dikes on the lower Fraser River.

So, Flaherty can ignore BC if he wants to. The province is looking at the "mother of all freshets" in the next eight to ten weeks. So, as the guy with the oil filter said: You can pay me now; or you can pay me later.

Let's hope Flaherty put a whole lot of contingency funding in the bank.
Posted by Dave at 23:00 Recommend this Post