Conservatives try to ditch Coulter. (But they'll take her advertising) 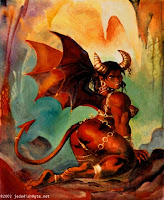 So Ann Coulter is getting to the conservative "movement".

It seems that a group of conservative blogs have undertaken to write the sponsors of the Conservative Political Action Conference and request that Ann Coulter no longer be invited to speak at future CPACs.

That's tough. It took them a while, didn't it? They've finally come to the realization that she's poisoning them.

I wasn't sure which of them to link to since it's the same letter everywhere, but this one had an interesting twist which tells more than a little about how deep Coulter is into this lot. She's like a freaking disease. (Click to enlarge screen shot) 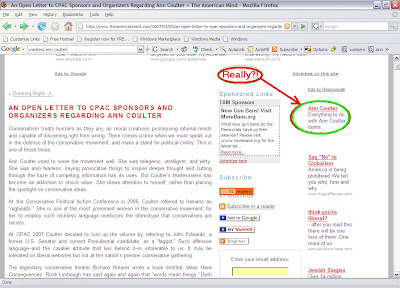 And to quote the last two paragraphs of the letter:

One of the points of CPAC is the opportunity it gives college students to meet other young conservatives and learn from our leaders. Unlike on their campuses—where they often feel alone—at CPAC they know they are part of a vibrant political movement. What example is set when one highlight of the conference is finding out what shocking phrase will emerge from Ann Coulter’s mouth? How can we teach young conservatives to fight for their principles with civility and respect when Ann Coulter is allowed to address the conference? Coulter’s invective is a sign of weak thinking and unprincipled politicking.

CPAC sponsors, the Age of Ann has passed. We, the undersigned, request that CPAC speaking invitations no longer be extended to Ann Coulter. Her words and attitude simply do too much damage.

Heh! Best of Wisconsin luck to you. And keep selling her stuff! That'll show her.

On the same point, at the time of writing this, Michelle Malkin, the Powerline tools, Red State and Townhall were curiously quiet and had not published the letter. Glenn Reynolds linked to it, but didn't republish it.