A snapshot in Conservative time.

Casting about the bazaars and this is what I found: (Click to enlarge)

There are more pictures of Stephane Dion on the front page of the Conservative Party website then there are of Steve Harper. Three more, in fact. The context is irrelevant and the message is lost in the obvious obsession the Harpers have in trying to present Dion in as negative a light as possible. 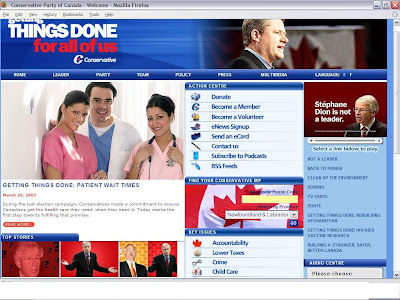 There is also the nice picture of the nice people supposedly representing medical professionals.
Where have I seen those people before?
Not in a hospital.... could it have been a retail advertising flyer?
You'd think the Conservatives could have dug up at least three medical professionals willing to appear on the CPoC website.

Moving along, and just randomly pulling one out of the air, I went to check out what Gordon 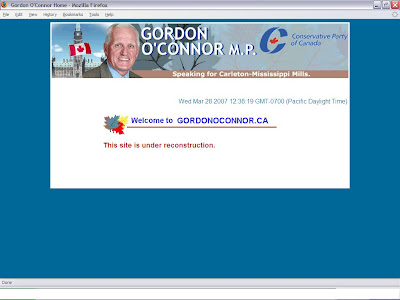 O'Connor was saying about himself. Apparently, his webmaster went on vacation and left us all a pertinent but very fitting message.
Posted by Dave at 13:00 Recommend this Post