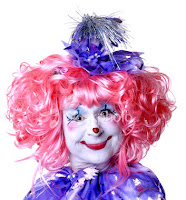 UPDATED
She must have a new book on the go or something. Speaking to a group of mouthbreathers, she elevated the political discourse of the American Conservative Union from it's usual position at the bottom of the bowl to a new spot on the toilet seat. ThinkProgress has the video.

I was going to have a few comments on the other Democratic presidential candidate John Edwards, but it turns out you have to go into rehab if you use the word ‘faggot,’ so I — so kind of an impasse, can’t really talk about Edwards.

Cool. And she's a lawyer.

Sadly, No! has summore.

All of this from someone who can't figure out her own age.

Update: Ohhh... The New York Times covers just a bit of the reaction to Coulter's latest bit of verbal sewage. She responded to criticisms with an email in which she said this:

C’mon, it was a joke. I would never insult gays by suggesting that they are like John Edwards. That would be mean.

All over the place, right-wingers are attempting to distance themselves from Coulter... because she went over the top this time. Really!

Because when she said this to a disabled Viet Nam veteran:

People like you caused us to lose that war.

That was enough to get her fired from MSNBC but not enough for the wingnuts to introduce her to the waste can.

When she wrote this about Muslims:

We should invade their countries, kill their leaders and convert them to Christianity

That got her fired, from of all places, the National Review. But it wasn't enough to cause the wingnuts relegate her to the hinterland of conservative commentary.

Her only defence for her comment is that it was a joke, and then she added that little twist at the end. It's her standard offering when she's caught out.

And the wingnut following that has apparently decided she is now too much for them? Don't count on that lasting. Or did you miss all the laughter when she made the statement. The wingnuts love her.

She's an addiction the wingnuts cannot live without.
Posted by Dave at 17:13 Recommend this Post