I've been peering through the internet tubes (in a valiant attempt to stop myself from throwing my computer out the window...tax season, working 6 days a week and my damn hard drive decides to die a slow and tortuous death! Gonna pull out all the stops and get myself a skookum new CPU - 2.8 ghz dual core processor, 160 G hard drive, couple of gigs of RAM.) I thought I better get this posting up before I dive too deeply into the booze.


The BBC has struck a deal with YouTube which will allow its content to be shown on the popular video-sharing Web site owned by Google.

The companies let the cat out of the bag at an international press conference this Friday lunchtime, announcing the creation of three BBC branded "channels" on YouTube. Starting immediately, fans of the British broadcaster around the world will able to enjoy clips of their favorite comedies, nature documentaries and news programs.

Like all of the clips on YouTube the BBC content will be in short-form. So it won't be possible to view an entire comedy episode, just a clip or a sketch from that show.

Bush and Cheney need to take a nap!

Lack of sleep can affect people’s moral judgement, a new study shows. The findings could have implications for people in positions of responsibility, whose decisions often have life or death consequences, such as overworked medical professionals and sleep-deprived soldiers.

William Killgore and colleagues at the Walter Reed Army Institute of Research in , set up an experiment with 26 healthy adults, all of whom were active-duty military personnel.

The participants were presented with a variety of hypothetical dilemmas, first when well rested and later, after staying awake for 53 hours. Situations included complex moral quandaries such as having to choosing whether or not to let one person die in order to save the lives of several others. Less weighty dilemmas without a moral component were also included, such as "is it OK to substitute ingredients in a chocolate brownies recipe?"

While participants did not become less “moral” when sleep deprived, they did require two seconds

longer on average to answer complex moral questions, Killgore says. However, questions without a moral component did not take longer to answer after participants were kept awake.

Mrs. Mills and the Tissue Brigade

from the irrepressible Mrs. Mills of the Sunday Times

Can you please confirm as to whether it is necessary to exclaim, "Pardon me" after sneezing?

What NOT to say:

There are all kinds of things one might say, though three to avoid are: “Sorry, did that go in your eye?”, “Wipe it off with this”, and “Ooh, I think I’ve wet myself.”

Why do women’s knickers get larger as they get older? When I first met my wife, they were the size of a handkerchief, now they reach up to her armpits.

A long overdue Spaced out Sunday 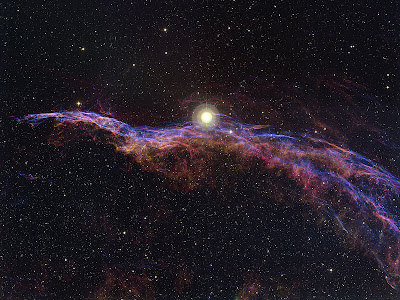 From one of my favourite sites NASA's Astronomy Picture of the Day Archive:

Ten thousand years ago, before the dawn of recorded human history, a new light must suddenly have appeared in the night sky and faded after a few weeks. Today we know this light was an exploding start and record the colorful expanding cloud as the Veil Nebula Pictured above is the west end of the Veil Nebula known technically as NGC 6960 but less formally as the Witch’s Broom Nebula. The rampaging gas gains its colors by impacting and exciting existing nearby gas.

And Last but not Least

For all that is (revenue and expense) holy and (Canada Income Tax Act) sacred....send me booze! (rum works - Dave has so thoroughly corrupted me in that department, I'm beyond redemption)