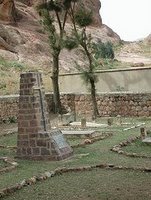 There are few high school students who could tell you who Alexander Roberston Dunn, VC actually was. He doesn't form a part of the Canadian psyche.

Alexander Robertson Dunn was born in the town of York, Upper Canada (Toronto) September 15, 1833. He was a graduate of Upper Canada College. To say he was Canadian, at that time would have been incorrect. Everyone living in Canada was a British subject, but that does not diminish the fact that he was Canadian born and he stood out among his peers, both British and North American.

Dunn joined the 11th Prince Albert's Own Regiment of Light Dragoons (Hussars), British Army after his father had moved back to England. It was a typical commission of the day, purchased and awarded by Horse Guards.

Dunn, although a stern disciplinarian, was reportedly popular with and well respected by his men. At 6 foot 3 inches, he rode tall in the saddle and had a reputation as an outstanding cavalry officer. In 1854 his unit sailed for Crimea as Britain and France attempted to halt the Russian advance into Turkey.

On the morning of October 25th, 1854, the 11th Hussars formed up on the Plain of Balaclava. They were one of two lines about to attack the enemy. The first line, made up of the 13th Light Dragoons on the right, the 17th Lancers in the centre and the 11th Hussars on the left were followed by a second line comprising the 8th Hussars on the right and the 4th Light Dragoons in the centre. During such frontal attacks, the centre was most at risk. The flanks rode to protect the centre - under normal circumstances, and in this case the left was protected soley by the 11th Hussars. Lt. Alexander Robertson Dunn commanded the 11th's F Troop.

On that October morning, as the order was given, 638 cavalrymen, in two lines, rushed into the Northern valley of the Plain. Both flanks were heavily defended by Russian artillery and they faced twelve batteries of guns, wheel-to-wheel, at the head of the valley. The most disastrous cavalry charge in the history of British warfare had begun - The Charge of The Light Brigade.

From the Legion Magazine:

Time and again he led his troop against the Russian guns. Finally the regiment was forced to withdraw when it came under withering fire from Fedouikine Hill on the right. While retiring from the scene, Dunn saw that Sergeant Robert Bentley from his troop was wrestling with his horse, which had been severely wounded, and the Russians had singled him out as a straggler. Three of them concentrated their efforts to knock him out of his saddle and were preparing to finish him off. Seeing his predicament, Dunn wheeled around and galloped through a maze of dead and dying as well as riderless horses charging about in all directions to rescue him.

Prancing, side-wheeling, rearing his thoroughbred, he parried, thrusted and slashed at the assailants, felling them all in a matter of minutes. But Bentley was still in dire straights, desperately hanging on to his horse by one of the stirrups so Dunn dismounted, lifted Bentley back into his own saddle, then belted the horse on the rump to send it galloping towards the British lines. On foot Dunn suddenly caught sight of Private Harvey Levett from his troop who had lost his mount and was in danger of being cut down by a Russian hussar. Dunn rushed to his aid and skewered the enemy to death with his giant-sized sabre. When he returned to his unit and saw how badly it had been decimated in what had been a full-scale slaughter he broke down and cried.

Dunn would wait two years for an honour which had yet to be established. When Queen Victoria assigned the Order in 1856, the eligibility was pre-dated to the Fall of 1854. The only officer* of the charge into the "valley of death" to receive the British Empire's highest honour was Lieutenant Alexander Robertson Dunn, one of 25 survivors of his 110 man unit that day. He was also the only cavalry officer to receive a VC during the Crimean War.

Dunn, while not the very first recipient of the VC was a member of the group of "originals" so honoured and can quite appropriately be considered to be not only the first VC won by a Canadian born soldier, but among the first won in the British Commonwealth.

Dunn returned to Canada after Crimea, having run off with the wife of a fellow officer. He was, however, an adventurer and, after two years at home, helped form the Prince of Wales Royal Canadian Regiment. He eventually went on to become a full colonel, the first Canadian to command a British regiment and the youngest colonel in the British army. He transferred to the 33rd Duke of Wellington's Regiment of Foot, took postings to Malta, India and eventually Abyssinia.

It was in Abyssinia that he met his death, supposedly through a hunting accident, although the circumstances of his death have always been mysterious. Some believe he may have been murdered, perhaps by a husband seeking revenge for Dunn's well-known womanizing.

In any case, his body lay undiscovered until 1945 when an Eritrean Mounted Police patrol, led by a British soldier discovered his grave. In 2001 Canadian military engineers traveled to Senafe and rehabilitated the gravesite.

Dunn's medals, including his VC, are in the possession of Upper Canada College in safe keeping. Replicas are on display.

* There were five VCs awarded to soldiers who participated in the actual Charge of The Light Brigade. Dunn was the only commissioned officer to receive a VC. The others were sergeants and troopers. Further awards made for the Battle of Balaclava went to non-commissioned troops of the Heavy Brigade, which did not make the charge, and to medical personnel who, under heavy fire from Russian guns, rescued wounded soldiers over the two days after the battle.
Posted by Dave at 15:25 Recommend this Post