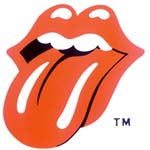 Some things are just too hard to resist. George Bush getting seen off for a good bunk is right at the top of the list.

From Julie Farby comes this story of a little flap between Dubya and Mick Jagger. That's right... Jumpin' Jack Flash got some Satisfaction with this one.

The 62-year old Rolling Stone star booked the luxury Royal Suite at the five-star Imperial Hotel in Vienna, Austria, for when the Stones are due to play a gig in the city in June.

So when President Bush’s aides tried to book the same room for a summit meeting, they were told the room was already taken.

Jagger, who is a fierce critic of the war in Iraq, refused to give up his hotel digs for the President, with a source close to the rocker saying, “Bush’s people seemed to be under the impression that they would just hand over the suites but there was no way Mick was going to do that.”

Maybe Bush should have sent out a message to Gimme Shelter.

Mick's answer... Get Off Of My Cloud.

Dubya should know better than to take on a Street Fighting Man like Mick.

Maybe Bush can just light a fire, pitch out his bedroll and sleep under the stars like the cowboy he likes to make himself out to be.

Oh, that's right. All hat, no cattle. Maybe Mick will play Wild Horses for him.
Posted by Dave at 19:24 Recommend this Post