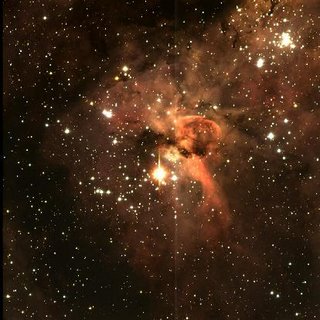 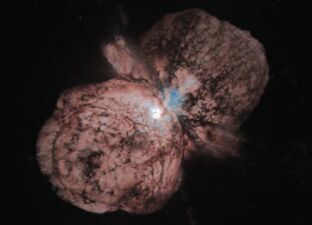 The top photo is of the Eta Carina Nebula, a large diffuse nebula 8000 light years away. In the middle of the photo is a large brilliant star, Eta Carinae, one of the strangest stars scientists have come across.

The bottom photo shows a closer view of Eta Carinae, a star whose magnitude changes with remarkable speed (magnitude refers to how bright an object appears as viewed from Earth. The higher the magnitude, the less bright it is. For example; Sirius, the brightest star, is -1.46, Vega is less bright at 0.03, and Antares appears even dimmer yet at 0.96).

It was first recorded in 1677 by Sir Edmond Halley who recorded it as a 4th magnitude star. In 1730, it reached 2nd magnitude brightness, fell to mag 4 in 1782, reached first magnitude in 1827, faded back to mag 2 for about 5 years and then rose back to mag 0. In 1843 a violent outburst saw the star became so bright (-0.8 magnitude) it outshone every star in Earth’s night sky with the exception of Sirius. It released as much visible light as a supernova explosion, but the star somehow managed to survive. The explosion produced the two “lobes” of stellar gas and dust. By 1868, the star became almost invisible and in 1900 it was classified as an 8th magnitude star. It stayed that way until 1941 when it slowly became brighter and brighter until it reached 6th mag by the early 1990's. In 1999, it suddenly brightened to 4th mag.

Eta Carinae is estimated to be 100 times heavier than our Sun, which would make it one of the most massive stars in our galaxy. Such massive stars usually have a lifespan of less than a million years and many scientists think Eta Carinae will probably end itself in a supernova explosion in the next 100,00 years (or less).
Posted by Cheryl at 08:03 Recommend this Post