Spaced out Sundays - The Face on Mars

Remember when you were a little kid and your Dad tried to convince you there was a “man in the moon”? Remember how disappointed you were when you were old enough to realize there was no such thing? Well, some people never got over their disappointment.

Back in 1976 one of the Viking orbiters captured an image of a geographical feature on Mars that bore a striking resemblance to a face. It started the stampede to see who could come up with the most half-baked, unhinged theory about alien-built structures. Quite possibly, the runaway winner of the contest was Richard Hoagland. Hoagland began his career in science in a respectable manner (a science writer, curator of the Springfield Massachusetts Museum of Science, science advisor to CBS). But he soon deteriorated into a conspiracy kook. The “face in Mars” has been the high point of his career. He wrote a book about it, claimed that not only was the “face” artificially made by aliens 500,000 years ago, but it was a part of a larger set of “ruins” on Mars that also included pyramids, a fortress and an artificial cliff. You would think his outrageous theories would make him the laughingstock of the media, but instead, he gloried in the attention and made the rounds of the television shows, the radio talk shows, the lecture circuits. 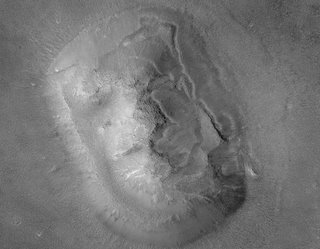 Over twenty years later, in 1998, NASA released new and higher resolution photographs of the same geophysical feature (taken by the Mars Global Surveyor). The “face” was nothing more than an eroded mesa. Swallowing his disappointment (and embarrassment) Hoagland maintained his defiance and concocted an elaborate conspiracy theory that NASA had doctored the photos in order to keep the public in the dark about this mysterious alien race that once lived on Mars.

Sigh….why is it that the natural beauties and wonders of the Universe are not enough for some people? (although I have my own theory…I think the Man in the Moon was evicted from the moon due to non-payment of rent and is currently claiming squatter’s rights on Mars).
Posted by Cheryl at 08:30 Recommend this Post