Harper's Federal Accountability Act has come under fire from a Conservative friendly lobby group. The Canadian Taxpayers Federation has joined the Canadian Newspaper Association in accusing Harper of pulling a bait and switch on Canadian voters. (Emphasis mine)

“We are calling on the government to implement – not study, but implement – the Information Commissioner’s recommendations for reform of the Access to Information Act, exactly as promised in the Conservatives’ election platform,” said CTF federal director John Williamson at a news conference on Parliament Hill today. “Prime Minister Harper is wrong if he believes this is politics as usual. Advocates seeking reform are not looking to pocket half a loaf here.”

Not to worry. We plugged that memory hole. It's not that I don't trust the Conservatives, but any party that's had three different names in under 10 years is trying to hide something. So, Cheryl, the unbelievable cynic, copied all of it. 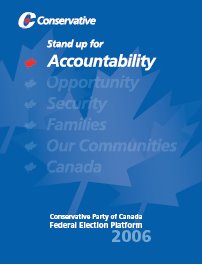 A Conservative government will:
• Implement the Information Commissioner’s recommendations for reform of the Access to Information Act.
• Give the Information Commissioner the power to order the release of information.
• Expand the coverage of the act to all Crown corporations, Officers of Parliament, foundations, and organizations that spend taxpayers’ money or perform public functions.
• Subject the exclusion of Cabinet confidences to review by the Information Commissioner.
• Oblige public officials to create the records necessary to document their actions and decisions.
• Provide a general public interest override for all exemptions, so that the public interest is put before the secrecy of the government.
• Ensure that all exemptions from the disclosure of government information are justified only on the basis of the harm or injury that would result from disclosure, not blanket exemption rules.
• Ensure that the disclosure requirements of the Access to Information Act cannot be circumvented by secrecy provisions in other federal acts, while respecting the confidentiality of national security and the privacy of personal information.

Well, smack me for being wrong, but none of that is in the bill Harper so proudly trotted out for everyone to see.

“By introducing the Federal Accountability Act without promised reforms to improve transparency, the government has played a game of bait and switch with Canadian voters,” said Anne Kothawala, President and CEO of the Canadian Newspaper Association. “Prime Minister Harper made a bold promise to restore the public’s trust in government, but, strangely, he left meaningful reforms to Access to Information out. It’s as if an auto manufacturer promised to make its cars safer, added airbags and left out the seatbelts.”

And we can't forget this little piece of indignation the Reform Conservatives provided in the preamble to their "plan".

The Liberal government has consistently rejected attempts to provide Canadians with better access to government information. The present Information Commissioner has gone to court several times to force the government to open its windows.

So much for "Mr. Accountability". Harper is intent on keeping as many secrets as he can. Once he realized that reforming Access to Information meant everyone would be looking at his government, he scrapped the idea.

Under normal circumstances I'd have a tendency to just brush this off as another broken promise from another opportunistic politician. But, given that this was the centerpiece of Harper's campaign and he was most adamant that this was the reason you should vote for him, I have a rather different label for him.