The 101st Fighting Keyboarders are getting their own body armour 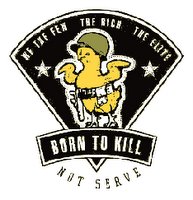 Well, I'm impressed. The seaman's apprentice has organized the mommy's basement brigade. Tired of hearing the term "chickenhawk" in the pejorative sense, Morrisey has managed to get some of his typists to abandon their extra-blogging internet cruising long enough to invent a badge. They've labeled themselves the 101st Fighting Keyboardists.

Hmmm... I hate to pop your bubble, but I'd stop producing the T-shirts right now. The name is 101st Fighting Keyboarders. I'm sure if you ask this guy, he'll be happy to assign the copyright, since he first coined the term.

Now, as to some of the other symbology. There's already a chickenhawk badge which resides in the pages of the New Hampshire Gazette, America's oldest newspaper.

Morrisey's suggestion that these terms originate with one corner of the blogosphere indicates a lack of research. Chickenhawks, the derogatory term, originated during the War of 1812, another adventure of dubious purpose.

But I digress. I'm here to help.

Morrisey's brigade of qwerty bashers will need some kind of typing song, or perhaps something akin to a Gregorian chant. Well, how about that! Somebody has already put one together for them.

And now we wait... for the next badge. The one when they proudly embrace another one of Tbogg's terms. Bush Cargo Cult.
Posted by Dave at 04:34 Recommend this Post