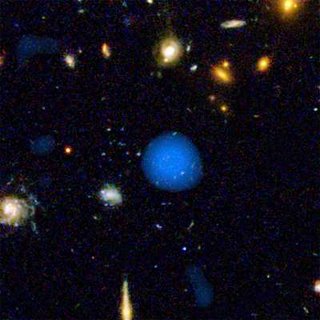 It’s 13 billion light-years away in a dark area of the universe called the GOODS field (the Great Observatories Origins Deep Survey field). It took the combined forces of the Hubble Space Telescope, the Chandra X-ray Observatory and the Spitzer Space Telescope to uncover it.

Scientists believe that these oversized black holes were not born this large, but instead, grew to this size by feeding on gas and stars from nearby galaxies during the early formative years of the universe.
Posted by Cheryl at 07:53 Recommend this Post