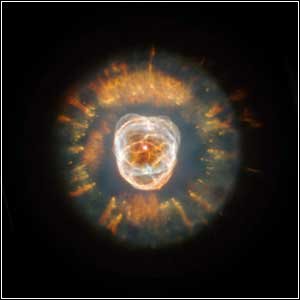 The beauty of the Universe. When this nebula was first spotted back in the late 1700’s, its discoverer, William Hershel, thought it looked like a face surrounded by a fur parka and promptly nicknamed it the “Eskimo Nebula”. The Hubble telescope captures an unusual feature of this dying star, the “fur” portion of the nebula appears to be a ring of comet-shaped objects whose tails are moving away from the centre “face”. Scientists have yet to explain what these comet-like features are. The centre “face” portion of the nebula is a disk of material being blown into space by winds traveling at just under a million miles per hour. The colours in this image represent the various gases making up the nebula: nitrogen (red), hydrogen (green), oxygen (blue), and helium (violet).
Posted by Cheryl at 08:25 Recommend this Post