The English Language Is Evolving 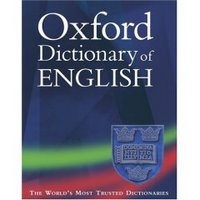 The largest English language research database in the world has reached 1 billion words.

A massive language research database responsible for bringing words such as "podcast'' and "celebutante'' to the pages of the Oxford dictionaries has officially hit a total 1 billion words, researchers at Oxford University Press said Wednesday.

That's pretty impressive when you consider that the vocabulary of university graduates with a batchelor of education degree in the US is estimated at about 50,000 words in 20,000 word families.

Drawing on sources including weblogs, chatrooms, newspapers, magazines and fiction, the Oxford English Corpus spots emerging trends in language usage to help guide lexicographers when composing the most recent editions of dictionaries.

The press publishes the Oxford English Dictionary, considered the most comprehensive dictionary of the language, which in its most recent August 2005 edition added words such as "supersize,'' "wiki'' and "retail politics'' on its pages.

I wonder if they picked up some of my old favourites? Hang-down, pencil-neck and dickweed tended to get a lot of use, and I notice they're coming back into vogue among some of my old friends and collegues.

As add-on and hybrid words _ such as "geek-chic,'' "inner-child'' or "gabfest'' _ increase in usage, Pearsall said part of the research project's goal was to identify words that have lasting power.

Aha! So they probably do have them in there.

The corpus collects evidence from all the places where English is spoken, including North America, Britain, the Caribbean, Australia or India, to reflect the most current and common usage of the English language.

I wonder if they have "Harperite" yet?
Posted by Dave at 13:24 Recommend this Post