Yes. We do use foul language. Your point? 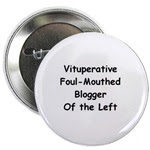 There was some mention, in comments and one email, about the "gutter" language used by some of us posting and commenting here at The Galloping Beaver.

That is to say, some of us here use language reminiscent of George Carlin's performance of Seven Words.

Well... that's quite true. Some of us do use that form of language. I particularly use certain words in posts when it reflects exactly how I'm feeling about something. And some readers, (not regulars), feel a need to take issue with it.

It's not like any of you have never heard or read those words before. In fact, I would go so far as to say most of you use them on occasion. You just wouldn't use them in polite company, I suppose.

It's not a newspaper, online or otherwise, it's not broadcast radio and it's not television. It's a blog and you come here of your own volition. If you don't like the language, hit the "back" button and you're outta here.

For what it's worth, most of us do try to temper our language... most of the time... sorta. But there is no policy and no rule. Each contributor has the freedom to speak in whatever form they wish, expletives and all. That's the freewheeling nature of blogs and this one is no different.

If you're worried about kids seeing it and learning words you didn't think they already knew I have one or two surprizes for you. Your kids, if they are left-clicking around Teh Tubes unsupervised, aren't learning anything new here. And, in any case, this isn't family hour. Everyone who posts here is an adult. What we write is intended for adults.

Some people don't like the pseudonymity (that's not really a word but, oh well). That's too bad. None of us are using this blog as a launching pad for a future career and we're not here to build some sort of journalistic reputation. We will have to leave Bill Donohue in sour disappointment. And the last book I wrote was a training manual which could conquer insomnia.

We do this because we get something personal out of it. That's all. And yes, there will continue to be vituperations and expletives.

Now, if you want to get one of those buttons (Up there! To the left!) you'll have to go to Blue Gal's emporium. She has the rights and we simply don't sell diddly-squat. Just click on the button and you're there.

Oh, one more thing. If you read this blog at work and decide to activate a You Tube video embedded in a post, like say, on Friday, you might want to make sure your volume is waaay down. As I said, this isn't family hour.
Posted by Dave at 23:14 Recommend this Post