Osama is back. Bush is in Crawford. OJ still hunting his wife's killer. 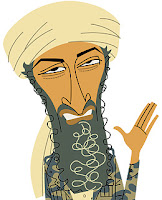 As JJ points out, most of those with al-Qaeda I.D. cards are probably already on their way to the next event of the tournament.

Osama bin Laden's latest release of a tape concentrated on Iraq and Israel.

Now, before anyone goes off piddling themselves, there is no independent verification of the tape.

The authenticity of the tape could not be independently confirmed. But the voice resembled that of bin Laden. The tape was posted on an Islamic militant Web site where al-Qaeda's media arm, Al-Sahab, issues the group's messages.

Resembled? You'd think somebody could put a sound spectrograph to work and resolve that. An old colleague of mine has certainly managed to do that with Killer Whales.

In any case, the appearance of yet another tape which even remotely suggests that Osama bin Laden is alive should be the height of embarrassment for this moron.

I know. You didn't even have to look. This game is getting way too easy.
Posted by Dave at 13:01 Recommend this Post