Suddenly, the Pentagon decides to preserve whatever is left after they destroyed it 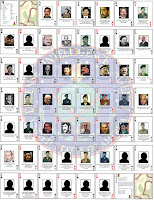 Remember those? (Click to enlarge). That was the deck of playing cards issued to US troops invading Iraq as an aide de memoir detailing the Most-Wanted from the Saddam regime.

The US military, aware that nothing can hold the attention of the troops like a good game of Texas Hold 'Em, has issued 50,000 decks of new cards. This time however, they have pictures of archaeological sites and advice on how to preserve and respect ancient ruins, buildings.... well, you get the picture.

American soldiers in Iraq have been issued with thousands of packs of playing cards urging them to protect and respect the country’s archaeological sites, in an effort to curb the destruction and plunder of Iraq’s antiquities.

Each card in the deck is illustrated with an ancient artefact or site, with tips on how to preserve archaeological remains and prevent looting.

The seven of clubs, for example, is illustrated with a photograph of the great Ctesiphon arch in Iraq, with the words: “This site has survived for seventeen centuries. Will it survive you?” The seven of spades declares: “Taking pictures is good. Removing artefacts for souvenirs is not.” The jack of diamonds is even more blunt. Alongside a picture of the Statue of Liberty, it asks: “How would you feel if someone stole her torch?” The effort to induce greater cultural awareness among US troops comes amid dire warnings from international archaeologists that Iraq’s ancient heritage is in greater peril than ever.

The looting of the Iraqi National Museum in the aftermath of the 2003 invasion caused widespread outrage, but with the security situation deteriorating, the robbery of ancient sites has accelerated to feed a booming illegal trade in stolen artefacts.

So, there's nothing like a little cultural awareness to keep things on the straight and narrow. Looting by invading armies and occupation forces is as old as warfare itself, but the pillage of certain areas of Iraq means that the ancient record of civilization is at risk.

It might have helped if the US military command in Iraq had imbued its troops with a little more cultural awareness earlier on in the game.

The contrast between the two card packs indicates a shift of emphasis on the part of the US military, away from destroying the enemy and emphasising the battle for “hearts and minds”. But some experts say that the well-meaning effort to instill cultural sensitivity in the troops comes far too late.

Yes, well, one could be excused for believing that it was the bone-weary, under-paid, grunt on the ground creating the problem. After all, issuing playing cards is clearly intended to reach those who would be playing cards to kill time.

You might expect command level decision makers to possess an awareness with a far greater breadth of knowledge. It is, after all, the duty of a professional officer to be as fully informed of his/her surroundings as possible.

You'd be wrong. The record is atrocious.

In one of the most notorious incidents, US troops constructed a helicopter pad on the ruins of ancient Babylon, filling sandbags with remains from what was once the holy city of Mesopotamia. The US military base built five years ago on the site of the ancient city of Ur, believed to have been the home of the prophet Abraham, is also causing irreparable damage. Under the Hague Convention heritage sites should not be used as military bases. US officials said that the base at Babylon had been built to protect the site, a claim dismissed by most archaeologists.

In fact, John Curtis, keeper of the British Museum's Near East department, was invited by the government of Iraq to survey the sites and found widespread destruction. Even he admitted that the base, when initially established, provided protection for the ruins.

However, it was what went on as the base was developed which is indefensible. Not only was there a heli-pad built right on top of pricless ruins, there was also a parking lot constructed. The dragons of the Ishtar Gate, built by King Nebuchadnezzer II in around 575 BCE, have been picked at and looted, leaving holes and gaps.

It might have helped if the "playing card" technique had been employed early enough to emphasize that in Iraq, Ishtar was something far more significant than the title of one of the worst motion pictures ever made.

Email ThisBlogThis!Share to TwitterShare to FacebookShare to Pinterest
Labels: archeology, Babylon, iraq, Ur