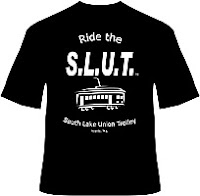 I like Seattle. That's probably because it's reasonably nearby and, because it is located in the US Pacific Northwest, it has that moderate climate I prefer. The people are friendly, the sights are impressive and there's that piece of Googie architecture left over from the 1962 World's Fair which I still find fetching in its own way.

In 1941, with a push from the oil and tire industries, the city of Seattle tore out the last of that city's street car system. The automobile had taken over and, like other US cities, Seattle would eventually be linked up with freeways and overpasses, all of which are now clogged with traffic. The city came close, (again, during the 1962 World's Fair), to taking a leading role in mass transit with the impressive Seattle Center monorail which completes its trip from downtown to the Seattle Center in two minutes.

Yesterday, Seattle got back into the streetcar game.

The 1.3-mile, $52.1 million South Lake Union line opened for business Wednesday amid speeches and pomp, ferrying hundreds back and forth between Westlake Center and the lake.

Now, I know the reinvention of the street car probably has no meaning to most of you, short of acknowledging the advantages of reliable and clean public transit systems, but Seattle has a teensy-weensy problem.

Back when the Seattle Mariners baseball team was looking for a new home outside the Kingdome the Washington State Major League Baseball Stadium Public Facilities District went looking for a sponsor. Enter Safeco insurance. Thus, once completed the new retractable domed facility was named Safeco Field.

Used to the Kingdome as a reference to the major league ball field, it didn't take residents long to adapt a new name for Safeco Field. They started calling it the "condome".

It was enough to make a mayor wince.

So, one would have thought that when naming the new streetcar system that some thought would have been put into avoiding anything too easily transmuted into something... suggestive.

Yesterday, Seattle opened a new streetcar system called the South Lake Union Trolley, or S.L.U.T. for short. You can get the T-shirt here.

Seattle's mayor Greg Nickles: "I don't care what you call it, as long as you ride it."