Is the CBC really doing this? 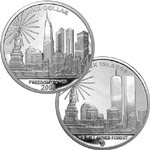 I have to ask because I don't really watch much television.

Emailer Colin sent me this. Aside from the fact that I really like what the guy has to say, apparently the CBC is also running ads, (since forever), marketing this never-to-be-circulated one dollar coin commemorating the destruction of the World Trade Center.

Two things to note here. The National Collector's Mint is not affiliated in any way with the US government. It is a private corporation.

The other thing worth noting, (just in case you succumb to one of those ads telling you that the coins have 71 mg of .999 silver recovered from a vault at Ground Zero, New York), is that the coin is not US at all. It's a Cook Islands coin. And, it's not silver. It's only silver plated.

There's something else worth noting, and perhaps the CBC should look into it. Back in 2004 the State of New York went to court and recceived an injunction to temporarily have the sale of the coins stopped.

Spitzer said the sale of the silver dollars emblazoned with the World Trade Center towers on one side and the planned Freedom Tower on the flip side is a fraud and he's investigating the claim the silver came from the ruins of the twin towers.

"It is a shameless attempt to profit from a national tragedy," Spitzer said. "This product has been promoted with claims that are false, misleading or unsubstantiated."

Now, I have no idea where that injunction ended up, but the coins did undergo some changes. So did the advertising.

The thing is, how many of these things does the National Collector's Mint think they will sell in Canada? And, if the CBC is running ads for them, apparently ad nauseum, perhaps their advertising time is too cheap.

So, if you're aware of these ads, leave a comment. It would be good to know if others have noticed.

Email ThisBlogThis!Share to TwitterShare to FacebookShare to Pinterest
Labels: cbc