Should we move the War on Christmas back three days? 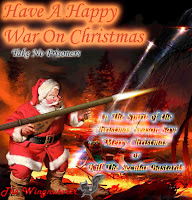 At 0608 Coordinated Universal Time, yesterday, 22 December 2007, an astronomical event reoccurred for the umpty-millionth or billionth time. The Sun was at its greatest distance from the celestial equator and was shining directly on the Tropic of Capricorn.

The result? In the Northern Hemisphere the shortest period of sunlight and the longest period of darkness in a 24 hour period.

It has also been the catalyst for a multitude of winter festivals in locations and countries all over the Northern Hemisphere for centuries.

Some Christians insist that sometime around the Winter Solstice, Jesus, their messiah, was born. Others disagree. In fact, even the Roman Catholic church, (the result of a deal between Roman Emperor Constantine and Christianity in 313 C.E.), doesn't really know when Jesus was born.

What is known, however, is that Natalis Invicti, the Roman celebration for the rebirth of the Sun was celebrated on what is now December 25th. And the celebration included some interesting rituals involving things like extra candles, little bonfires, a big feast, gift exchanges and other forms of revelry.

The Romans had it wrong, probably because it took a couple of days to notice that the Sun was actually shining a little longer. Natalis Invicti, which celebrated the rebirth of the "Unconquered Sun" missed the actual solstice by about three days.

Up until the 4th Century there was no mention of when Jesus was actually born. It wasn't until the Chronography of Filocalus was written for a wealthy Roman named Valentius in 354 C.E. that a birthdate for Jesus actually ever appeared. (Part 12 for those interested in the entry).

There was however, something else going on.

Ramsay MacMullen, in Christianity and Paganism in the Fourth to Eighth Centuries found a historical piece written by Jacob Bar-Salibi, one of the best known bishops of the Syriac Orthodox church. Written in the 12th Century Bar-Salibi makes an interesting observation:

It was a custom of the Pagans to celebrate on the same 25 December the birthday of the Sun, at which they kindled lights in token of festivity. In these solemnities and revelries the Christians also took part. Accordingly when the doctors of the Church perceived that the Christians had a leaning to this festival, they took counsel and resolved that the true Nativity should be solemnised on that day.

So let's get this straight. The Archbishop of Canterbury says the whole nativity production is nothing but a legend and not based on fact. The Roman Catholic church doesn't know when Jesus was really born, but admit that the Roman festival of Natalis Invicti, held on 25 December probably had some influence on the date they use for Christmas.

Natalis Invicti was celebrated in various forms under different Roman emperors owing to the habit of emperors to create religions in their own name during their reign. Natalis Invicti, a big day on the Roman party calendar, was centered around Sun worship and always held on December 25th, right into Constantine's rule... who became a Christian. Constantine, in 313 C.E., decriminalized Christianity with the Edict of Milan.

Natalis Invicti remained a big day with Roman party animals, Christians included. Then, sometime before 354 C.E., Jesus is listed as a martyr, just in time for a new emperor, Theodosius I, to pass a law making Christianity the official state religion of the Roman Empire.

In adopting Constantine's Nicene Creed as the official religious doctrine of Rome, all other religious practices were outlawed. That meant Natalis Invicti, based on Sun worship, had to go. But what about all those Roman party fanatics? They weren't going to take kindly to having a really good blow-out canceled on the grounds of some creed written by a dead ruler.

No problem. The Christians had already provided the answer. In order to participate in the Natalis Invicti rave they had already provided their own excuse to whoop it up. Since no one really knew when Jesus was born, they had simply listed the big party day as Jesus' birthday. Any guilt for participating in a "pagan" festival was eliminated. They were just celebrating a "birthday".

So, it's worth keeping in mind that, if the Romans had gotten the Winter Solstice right, the whole" birthday of Jesus" thing would probably have happened yesterday and we'd now be doing a mop-up operation on the War On Christmas.

Image courtesy of The Wingnuterer.
Posted by Dave at 15:10 Recommend this Post

Email ThisBlogThis!Share to TwitterShare to FacebookShare to Pinterest
Labels: War on Christmas