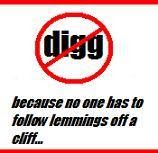 Maybe Kevin Rose needs to lose more than his girlfriend over his Digg site.

It seems Digg has taken to banning some of our friends because of their lifestyle. Gay and lesbian sites are suddenly disappearing from Digg and the site owners are being informed that they are being banned because of "mature content".

Well, call me pedantic, but I just found this site on the front page of Digg's lifestyle section. Warning: Not Safe For Work!

That's one busy little sidebar, don't you think? Why, I'd go so far as to suggest that might be "mature content".

So, Digg can't claim this is some sort of "morality" issue. And they can't call Cap'n Dyke, Lesbian Pirate Queen & Rogue Blogger anything nearing offensive and really mean it.

Do yourself a favour. Give Digg the heave-ho and, as Chet says, bury it.

Update: Bastard.logic tosses away the scabbard and shows Digg yet another cutlass.
Posted by Dave at 09:28 Recommend this Post