Teens are having sex. Get over it. 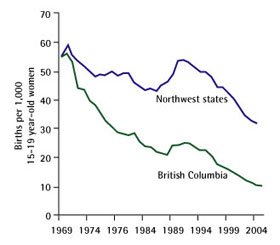 Of course one only has to raise two daughters and such a statement would normally send chills down your spine. Unless you've found... reality.

This report from the Sightline Institute provides some encouraging information. Teens are becoming better informed when it comes to sex. And, fewer teen women are faced with an unwanted or unexpected pregancy.

Sightline Institute studies a wide range of trends in the region known as Cascadia: British Columbia, Canada, and the American states of Washington, Oregon and Idaho.

Clark Williams-Derry compiled the report and discovered some interesting details. While there is a sharp decline in teen pregnancies across the region, British Columbia has led the way and has seen the most significant drop since 1969.

Not abortion. Access to legal abortion expanded in the 1970s, and remained relatively unrestricted throughout the period in Cascadia (in contrast to some other parts of the continent). But the result of increased access has been not a rising but a falling teen abortion rate ever since 1980—in the Northwest states, it has fallen even faster than teen births since 1995.

What the report does underline however, is the marked difference in sexual health services available to American and Canadian teens. And if anyone thought abstinence-only propaganda provided to American teens was having any noticeable effect, consider that British Columbia teens get no abstinence education. The British Columbia school curriculum is described as sexuality education.

Not abstinence—or hardly abstinence at all. Limited local data and more-robust national data from Canada and the United States suggest that teens—especially males—are slightly slower to have sex now than a decade ago. And they are moderately slower to switch partners. They’re probably not making these choices because of the US federal program promoting abstinence-only sex education. Canadian teens, virtually none of whom get abstinence-only sex ed, are also somewhat less sexually active, the same as American teens.

So, what about this could strike the fear of Jeebus in the local fundie abstinence purveyor? Well, this:

Not less sex but safer sex likely accounts for most of the improvement.

In short, despite the slightly longer wait that average numbers of teens are taking before exploring sex, when they decide to take it off the dance floor, they're a whole lot better informed.

British Columbia was singled statistically and to great advantage.

British Columbia’s strong record suggests there may be synergy between the province’s low poverty and the comprehensive suite of reproductive health services it offers to all women. Young women who are motivated make fuller use of the tools available to them, which in the province include sexuality education in schools, contraceptive services from doctors and clinics, over-the-counter emergency contraceptive pills from all pharmacies, and a reliable network of safe, legal abortion providers.

British Columbians shouldn't get too smug too fast. Sexuality education and awareness is a part of the core curriculum in schools. School boards, while required to provide the information can apply it in any way they see fit. The result is the abhorrent methods employed by Abbotsford school district and Surrey school district. In the case of Surrey, one doesn't have to look too deep to see that the problem originates with the likes of board trustee Heather Stilwell who opposes sex education in schools at all, demanded that condom dispensers be removed from schools and led the charge to have books on sexuality banned from Surrey school district.

Abbotsford school board, slow to arrive in the 21st Century, just joined the British Columbia School Trustees Association. Long an area considered a bible-belt, the demographics are changing rapidly. Neither Abbotsford nor Surrey can deny that generally they are opposing a program that is working. (Actually, they do deny it. They want abstinence-only education which violates Department of Education policy.)

The different attitudes toward sexual activity on the whole is perhaps best demonstrated by a simple moniker. Planned Parenthood in Canada changed its name to better reflect its mission and is now called Options For Sexual Health. Although both organizations remain related Planned Parenthood in Seattle had this to say when interviewed:

Planned Parenthood in Washington state say they have "Canada- envy" and are in a battle to pass what they call the "Medically Accurate Sex Education Bill" to provide broader-based B.C.-style sex ed.

PP has one statistic which, if nothing else, should give reason for American states to pay closer attention to BC's direction.

Not to mention the marginalization suffered by teen mothers and the fact that almost 70% will see their education and lives stalled from the time they give birth, for the rest of their lives.

And, for those who still believe that abstinence-only sex education (if you can call it education) is still the best way to go, well, there's this. It's sort of like hitting yourself with a hammer, over and over and over.
Posted by Dave at 17:10 Recommend this Post