On May 7th, veterans, serving sailors and observers will gather at naval memorials, cenotaphs and naval bases to commemorate the service, sacrifice and ultimate victory in the longest running battle of World War II – The Battle of the Atlantic.

The Battle of the Atlantic started 3 September 1939 and ended 8 May 1945. Although many navies participated in the fight on the Allied side, the British Royal Navy and the Royal Canadian Navy carried a solid majority of the battle throughout its duration.

At the start of World War II the RCN had 13 ships, six of them destroyers. By the end of the Battle of the Atlantic, Canada had the third largest navy in the world with 373 ships and over 110,000 personnel.

It was during this battle that Canada, for the first time since the War of 1812, was attacked. On 10 June, 1942, U-553 torpedoed the British freighter Nicoya just off Anticosti Island. The Battle of the St. Lawrence would continue for two years at a cost of 23 ships lost, four of them warships. Included was the SS Caribou, the Port-aux-Basque ferry which sank with a loss of 136 lives in the Cabot Strait. The last ship lost was the corvette, HMCS Shawinigan which was torpedoed and sunk with no survivors from its crew of 91.

The Battle of the Atlantic was the war of the little ships. Canada, with little to put into the effort at the start, embarked on a ship building program of corvettes. These ships sailed the North Atlantic in all weather testing their 205 foot length and producing unbelievable misery for the crews. Ships’ companies fought not just German U-boats but unrelenting bad weather, wet messdecks, terrible food and a persistent lack of sleep.

Corvettes, cheap and easy to build, held the line until a much more capable ocean escort could be put into service – the frigate.

The RCN crews, all volunteers, came from every part of Canada. And over 2000 gave their lives with the loss of 24 warships. To even that score, they sank 50 German u-boats, alone or in consort with other ships and aircraft.

The Canadian-flagged merchant marine, the primary target of the U-boats, lost approximately 1600 people from torpedoes, mines and collisions. 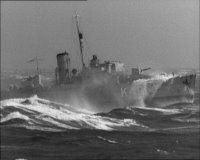 By late 1942 there was a real fear that the U-boats were winning the battle. By mid-1943 however, the tide had turned and the Allies went on the offensive by sending out hunter-killer groups to roam the Atlantic and kill the submarines before they could attack a convoy.

On April 16th, 1945 HMCS Esquimalt, patrolling off Halifax Harbour, was torpedoed by U-190. From her crew of 70 only 26 survived. She was the last ship lost by the RCN to enemy action. The U-boats surrendered three weeks later and the Battle of the Atlantic was over.

Very few of those who died during the Battle of the Atlantic lie in marked graves. Almost all of those killed were lost with their ship, died awaiting rescue in the freezing North Atlantic, or succumbed to wounds. Those whose bodies were recovered were buried at sea.

The veterans of the Battle of the Atlantic, whose ages ranged from 17 to 26 years during the fight, are now in their eighties. Many have passed on.

They were the likes of Chief Petty Officer Max Bernays who won a Conspicuous Gallantry Medal and who many believe should have been awarded a Victoria Cross.

They were Able Seaman Joe Bell who, when HMCS Athabaskan was sunk in the Bay of Biscay, badly burned and suffering from ingested fuel oil, spent the rest of the war in a German prison camp. He would struggle with what we now call post-traumatic stress disorder to his dying day, but he was proud of his generation and what they had done.

They were Able Seaman Jack Hannam who defied orders and rescued six of HMCS Athabaskan’s survivors off the coast of France and then took his 27 foot motor-cutter back to England, with a faulty motor and after a long, deadly night in a torpedo boat infested English Channel. Jack retired as a Lieutenant Commander, shortly after he promoted me to Leading Seaman.

So, if you hear a bell ringing 24 times in the distance, it is the roll being called for the ships that never came home and the crews they took with them.