Spaced out Sundays - Fireworks in the Sky 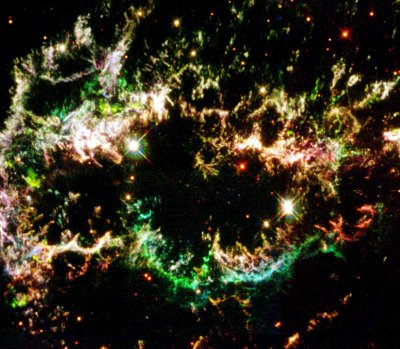 Rainbow-coloured fireworks in space; red, white, blue, pink, green, orange. A thing of beauty we call Cassiopeia A (Cas A for short). The giant star whose death is recorded in this photo, began its life about 10 million years ago and 60 trillion miles away. Ten thousand years ago the lack of hydrogen and the forces of gravity caused the star to finally end its life in a spectacular supernova explosion. Around the year 1680 the light from this explosion finally reached Earth, but it wasn’t light that caused the discovery of this event, it was radio. Cas A is the strongest radio source in the sky beyond our solar system. When radio astronomers were finally able to pinpoint the location of Cas A, telescopes could finally be trained on the site.

What we see in the photo is the remnants of the supernova explosion. The dust clouds contain the particles and elements of the star that were blown into space. The colours in the picture are associated with the various elements; blue is oxygen, red is sulpher, and the remaining colours results from differing proportions of these elements. These clouds of dust and gas will eventually condense and become the building materials in the birth of new stars.
Posted by Cheryl at 09:51 Recommend this Post