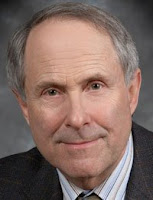 Given the latest batch of attack ads approved by the senior members of the Prime Minister's Office, one would wonder why, given the thrust of those ads, they allow one of their own, a born and raised American, to meander unfettered through the op-ed pages of Canadian newspapers depositing easily refutable bovine scat.

Tom Flanagan, Harper confidant, unrepentant aboriginal assimilationist and cheerleader of a free-market system from which he has remained insulated by lodging himself in academic institutions throughout his adult life comes out with another whopper of Reform Party bile.

Flanagan, the neo-human-rights activist*, suggests the solution to irrational prejudice and discrimination is to let the free-market sort it out. This, he opines, is much better than human rights commissions and tribunals which he describes as suffering from "blowback".

Both federal and provincial commissions are suffering blowback from their unsuccessful attempts to muzzle media gadflies Mark Steyn and Ezra Levant.

Excuse me, but that is not what happened. The federal and provincial human rights tribunals rejected the attempt to muzzle by claimants. For a much more accurate and truthful picture of things, you must go here.

And the free-market observer's solution to the falsehood he initially presents?

There is discrimination in the private sector, but it is self-liquidating over time because of the costs it imposes on discriminators. Governmental discrimination, in contrast, perpetuates itself because it is backed by state coercion.

Very cute. Except that the examples of private sector discrimination he provides took government intervention to eliminate. Normally, a larger government imposing rule over a smaller one and the greater whole (nation) exposing the regional discriminatory behaviour of a smaller constituency (state or province). The free market does little to sort itself out if it can get away with a discriminatory behaviour and still turn a profit. And Flanagan, in the examples he provides, fails to acknowledge that the free-marketeers' discriminatory behaviour of the past, (which had to be beaten out of them with legislation), was rooted in practices which, once made illegal, chewed into their bottom-line: African slavery in the U.S. and imported cheap oriental labour in Canada. Once the free-marketeers were denied access to those free and cheap pools of labour they treated those they could no longer indenture as a pestilence to be eradicated.

Flanagan knows this, lest he has forgotten some of his own written works.

The point here, however, is to shine a little light on the hypocrisy. As the frat boys in the PM's office bounce around like a bunch of primates at the San Diego Zoo flinging feces at anything that presents the slightest threat to their comfort and weak grip on power, they have among them a worse example than their current target, Michael Ignatieff.

They have Tom Flanagan and he can't seem to shut up.

Flanagan's public biography is short and lacking any substantial detail. Whether this is deliberate or not on Flanagan's part it fits with the model assumed by both Canadian reform-conservatives and US movement-conservatives. While Flanagan may have no particular reason, his fellow travellers do: they would have you believe they have always been great men destined for positions of power. They would like less of their past revealed because it would underscore parts of their lives which would ring negative in a world of valence politics.

The truth is, Flanagan's personal history weaves through a significant era of US and Canadian politics and his positioning in academic institutions on either side of the Canada-US border at particular times tells a story in itself.

Flanagan was raised in Illinois in a politically conservative upper-middle class family. As he was coming out of high-school the US was entering a phase of its existence which can only be described as tumultuous. Flanagan would have been subject to the US Selective Service System after his 18th birthday. Except that, like Dick Cheney, neither volunteering for US military service nor being available for conscripted duty was in Flanagan's cards.

As US involvement in Viet Nam expanded and the US Army started demanding more troops, the young men of the priviledged conservative white community found ways to avoid military service altogether. Educational deferments bought a minimum of 4 years of time - if one's parents could afford to keep their progeny in college, and Flanagan was a product of the social and economic caste that flocked to the universities as a means to avoid donning a uniform.

As the US draft cycled up and Viet Nam became the war of the less priviledged, Selective Service regulations were changing. As Flanagan's educational deferment would have expired his recent marriage would have made that deferment permanent, until Lyndon Johnson issued an Executive Order rescinding exemptions for married men.

And then, if the stories are to be believed, another American, E. Burke Inlow, recruited Flanagan to the University of Calgary. And then Flanagan, a year after the draft age in the US was expanded to include married males to age 35, was on the other side of the US border.

When Flanagan came to Canada he admits to knowing nothing of the place. Yet here he was, just as the Viet Nam war was at full heat, the same place US draft-dodgers and deserters found safe haven.

It depends on whether you believe in coincidences.

And now he is manipulating our politics. An American conservative who imported his political beliefs and training.

And the shit-flinging primates in Harper's office have the unmitigated gall to call any other person a carpet-bagger.

* Sarcasm, for those who didn't catch it.
Posted by Dave at 15:44 Recommend this Post