The right-wing's "Hiroshima Defence" of torture... 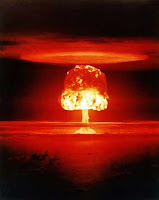 ... goes deeper than the level of thought most of those who spout this argument can manage.

Rush Limbaugh couldn't have skewed two unrelated concepts into one any better. The United States committed a heinous act in the nuclear bombing of Japan. Torturing one person is less heinous than killing 160,000 people. Therefore, torture is perfectly alright.

No context, no circumstances. Just compare apples and oranges and sit back... unchallenged.

We could go on all day over the moral aspect of blowing entire cities, and their populations, off the map in a few seconds, but that's actually another subject. Let's stick to torture and the right-wing "Hiroshima defence".

Buchanan and his shrinking legions need to go to the library. The book is War In The Pacific, Volume 1, by Jerome T. Hagen. The reader will go immediately to chapter 25, page 159 of the book.

The title of the chapter is: The Lie of Marcus McDilda.

On August 9th, 1945, the Japanese Imperial cabinet was still debating whether to accept the terms of surrender in the Potsdam Declaration. Neither side, (continue to fight vs surrender), dominated the table despite the fact that the US had now twice attacked Japanese cities with atomic bombs.

One of the arguments put forward by the "fight to extinction" faction was the feeling that the US had just shot their wad. The Japanese were aware of the enormous difficulty in producing atomic bombs and many believed the US had no reserve arsenal of such weapons.

The War Minister, Korechika Anami, in the "surrender immediately" faction, disagreed - and he had an ace to play.

Anami told the cabinet that a recently captured B-29 pilot, 1st Lieutenant Marcus McDilda, while undergoing torture, had told his tormentors that the US possessed 100 atomic bombs and that Tokyo and Kyoto were next on the list of targets.

Except that it wasn't true. McDilda had indeed told his interrogators the story but, in fact, he knew nothing of the Manhatten Project, knew nothing about the US atomic bomb arsenal and knew nothing about any targetting plot. In an attempt to end his torture he had told the Japanese what they wanted to hear. McDilda was immediately classified a high-value prisoner - something which probably saved his life.

In truth, the US had no ready use arsenal of atomic bombs and would not have another bomb ready for almost two weeks. After that, a fourth bomb would not be ready for use until mid-September.

McDilda's information, obtained through torture, was completely false. Yet it solidified the position of one faction of the Japanese cabinet.

The Japanese played the right-wing's "ticking time bomb" scenario and proved it a useless tool.

Buchanan's comparison fails and the moral deficit of those who promote torture as a means of defending their country stands.
Posted by Dave at 12:15 Recommend this Post