Just when you think that what you know about the George W. Bush administration's depravity, rank hypocracy and sadististic bullying masquerading as patriotic piety has hit the bottom of the barrel, someone comes along and points out that there is a whole other barrel underneath this one. Apparently Donald Rumsfeld, not content to have things like prayer meetings going on at the Pentagon and a chief of Special Forces who make Gen. Jack T. Ripper look like the moderate wing of the GOP/military axis, took it upon himself to make special title pages for the regular top secret briefing he delivered to the president and handful of others. Pages with heroic, glamorous images of America's Heroic Glamorous Defenders of Heroic Freedom Heroically Defending Freedom in Glamorous ways, overlaid with stirring passages from, yep - you guessed it - the Bible. 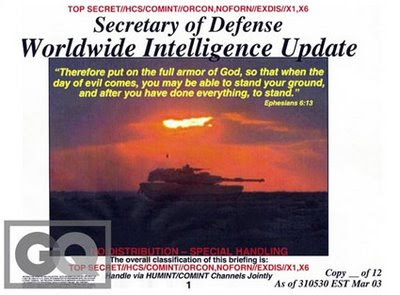 See them all here


Keep in mind that this was not an attempt to play to the religious rubes out there in the hinterlands or a pose adopted to curry favor with the evangelistic electorate. These covers were for super-secret executive level only reports that were circulated only to the most senior people.
One wonders what the "Prince of Peace" would make of that. One also wonders why none of these pictures were included with suitable biblical quotes: 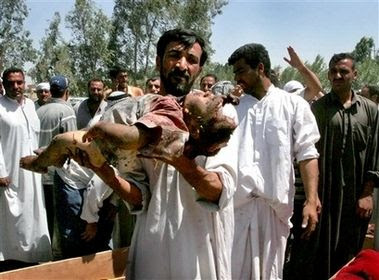 Blessed are the meek, for they shall inherit the earth 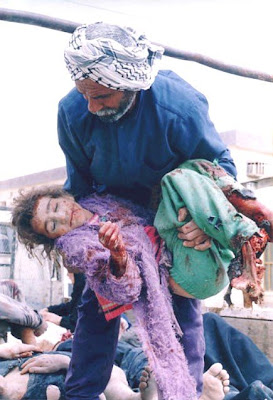 Whatever you do to the least of my brothers, you do to me. 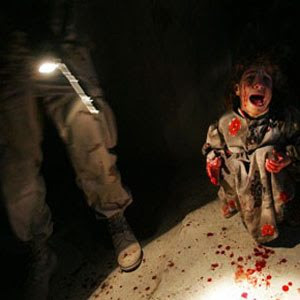 Suffer the little children to come unto me

If you are American, write your president, your congressman, your senator, your newspaper and demand that the people responsible for starting this hideous human meatgrinder on false pretenses for their own selfish reasons be brought to trial.

Gratitude to fellow Fez enthusiast Atta J. Turk, this is all crossposted from the Woodshed.
Posted by Unknown at 16:31 Recommend this Post