Poking a bear with a stick 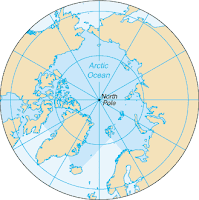 The next time Petey MacKay raps on about unwarranted and unprovoked incursions by Russian aircraft into the North American Air Defence Identification Zone he might want to keep this in mind:

Federal officials are confirming to The Canadian Press that Canada's Arctic mapping flights have ventured beyond the North Pole into areas claimed by Russia.

The flights are the first step towards building a case that Canada's Arctic sovereignty could reach past the Pole despite Russia's determination to extend its own northern footprint.

Arctic experts say the extended overflights are a sign that Canada has no intention of backing down in the face of Russian claims.

Scientists are now examining data from the flights to see if there's enough support for Canada's case to justify more detailed seafloor mapping on the other side of the Pole.

Other countries including the United States, Norway and Denmark have challenged Russia's claim to a section of the Arctic shelf believed to contain significant energy reserves.

And just to be clear here, I don't disagree with the exploration, although any claim made by Canada to extend territorial sovereignty beyond Geographic North is going to go exactly nowhere.

(I'm assuming it was Geographic North referred to in the article. There are, after all, three distinctly different North Poles.)

In the past few days I've had some conversations with people who have some interesting views on this. Hopefully I'll get the opportunity a little later to extract their main points and put them onto a page.

In the meantime, it looks like the warming of the Pole is moving along at about the same pace as the revival of the Cold War.

Perhaps Canada's best option is just to send a bunch of Canadians to an ice floe at the geographic North Pole with seal blood dripping from our chins. That seems to make everyone else squeamish and sends them running away, puking.

Email ThisBlogThis!Share to TwitterShare to FacebookShare to Pinterest
Labels: Arctic