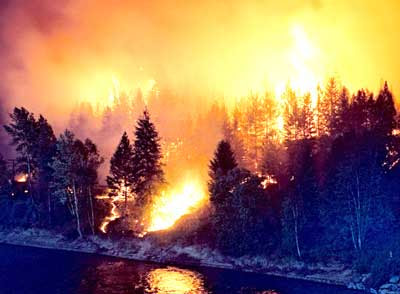 Brought to you by Gordon Campbell and a failed forest protection policy. (Emphasis mine)

Many communities in the B.C. Interior are at significant risk of potentially catastrophic forest fires this summer, because critical prevention work promised by the government has not been done, a forestry expert said Friday.

It could make 2003, when the town of Louis Creek was wiped off the BC landscape, look tame.

Campbell and his Vancouver-centric government have been in possession of the facts for six years.

British Columbians can consider themselves fortunate that the disaster was not worse. Few communities in the province would have been immune from an interface fire, given the extreme danger ratings over the course of the summer. Without action, the danger remains.

And what came out of that report, now sitting on a shelf, gathering dust?

The top 100 bureaucrats in the provincial government will receive salary increases as large as 43 per cent, all in a bid to attract and keep top executives...

Right. Heckuva job they're doing. I'm willing to bet there is not one of those "top bureaucrats", regardless of ministery, who doesn't have at least one priority file with the words 2010 Olympics in it distracting them from the job British Columbians are actually paying them to do.
Posted by Dave at 07:07 Recommend this Post

Email ThisBlogThis!Share to TwitterShare to FacebookShare to Pinterest
Labels: BC fire risk, Campbell, government by for and of the 2010 olympics