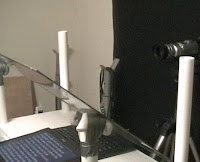 How does one link the facade of Stephen Harper with an Italian ice cream advertisement?

Easy. Neither of them represent reality.

Inasmuch as the depiction of two people committing a "sin" against Catholic church policy is no more than an attempt grab your attention for another purpose, the public presentation of Harper is an attempt to shift your focus away from the real person.

Harper is depicted by his supporters and handlers as a confident, thoughtful, tough individual: A guy with some kind of beautiful mind who cuts through the crap with frank talk.

Except that, just like the ice cream ad, it's a purpose created illusion.

As the right-wing screech machine went into overdrive at the fact that Barack Obama used a teleprompter, they conveniently "forgot" that the hero who was sitting in the cab of their international train-wreck, at a leaders debate during the 2004 presidential election may have been nothing more than a sock-puppet mouthing the words provided by others to questions directed at him.

Teleprompters are nothing new. Most prominent politicians use them when making a speech in order to actually deliver as close to the copy which has been handed out to the audience. Obama, unlike many past politicians, is willing to wave off the copy in front of him and actually tell you what he's thinking.

Not so, Stephen Harper. Harper needs a teleprompter to "stay on message". Everything he does is scripted. The object is to make sure Harper says nothing and does nothing to reveal the true nature of the beast.

Harper is highly paranoid. Confident, thoughtful and tough? Not so much. When Harper lost the 2004 election he vanished - for months. When he finds himself trapped with a difficult question he demonstrates quite clearly that he cannot think on his feet; rather than outwit his opponents he engages in personal attacks and smears. When caught out in an interview, without scripted answers, he utters outrageous statements you could drive a frigate through. (Lest you haven't figured out that his advice on stock market bargains was more than a little out-to-lunch.)

And now we get the real story of Harper from one who was there when "the message" machine failed, via Dr. Dawg.

Have an ice cream cone and go read.
Posted by Dave at 16:01 Recommend this Post