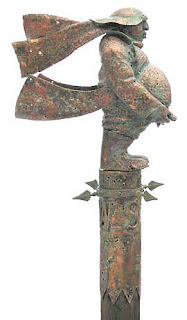 The machismo that is the distinctive characteristic of Harper Party bluster is shattering. In the pissing contest that Harper and his hillbilly cabinet started in 2007 over the Chalk River nuclear reactor and the medical isotope shortage there has been a sudden shift in the wind.

The former head of the nuclear safety watchdog says the current shutdown of the nuclear reactor at Chalk River is worse than the prolonged closure a year and a half ago that led to her getting fired. [...] Keen today said the current shutdown is worse because in 2007, the CNSC and AECL knew the whole time what needed to be done and it would have only taken a week to do, whereas this time the length of the shutdown is still unknown.

If some nuclear engineers close to the situation are to be taken for their understanding, this is going to be a long shutdown.

In short, the Harper government did nothing from the time of the last shutdown to the present to recitfy a situation a high-school student could have predicted.

Under normal circumstances, where the regulator and the facility were working together to solve the problems with the reactor and its production, the government might be able to start kicking some asses and taking some names, but not now. From the point where Harper countermanded the requirements of then CNSC president Linda Keen and forced the Chalk River reactor back into operation through a parliamentary vote, (then fired Keen), the responsibility for that reactor's continued safe operation became the sole province of Harper and his Minister of Natural Resources.

In short, Harper himself is to blame for the state of the Chalk River reactor today and the current rationing of medical isotopes.

It will probably take more time, but eventually Harper and his mediocre collegues will figure out that the warm water hitting them in the face is not a late spring rain.

Now head on over to Impolitcal for more.
Posted by Dave at 17:17 Recommend this Post