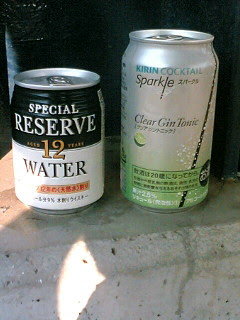 This purpose of this post is partly to vent (isn't it always?) partly to inform, partly to show off my behind the scenes knowledge of big media, and partly to provide Dave (no, not that Dave, the other Dave) of photographic evidence of the fact that if it is drinkable (and sometimes even if it isn't) you can buy it in a can in Japan.

I had one of those "What the fuck am I doing here?" kind of days at the office today. What it comes down to is that I'm just plain getting tired of watching reality and the truth get slapped around the office like a pair of red-headed stepchildren who went on to become cheap crack whores. (oh yeah, one more purpose -- to see if my boss is spying on me)

We had a lengthy piece in the paper about the activities of the Japanese Navy, I mean the Maritime Self Defense Force (article 9 of the constitution says Japan can't have a navy, so all those AEGIS destroyers and the new pocket carrier are part of the Self Defense Forces, NOT the navy). Concerns are being raised by various peacenik NPOs and other "obvious troublemakers" intent on disturbing the national wa, that the MSDF may have broken the law that authorizes them to take part in Operation Enduring Freedom.

This is kind of a big deal in Japan, because despite their military alliance with the U.S. the government's interpretation of Article 9 is that while Japan has the right to collective self-defense (as all nations do under the UN charter) the constitution forbids the nation to exercise that right, just as it forbids the nation from maintaining armed forces.


let look at that pesky section of Japan's basic law:

ARTICLE 9. Aspiring sincerely to an international peace based on justice and order, the Japanese people forever renounce war as a sovereign right of the nation and the threat or use of force as means of settling international disputes.
第九条 日本国民は、正義と秩序を基調とする国際平和を誠実に希求し、国権の発動た 戦争と、武力による威嚇又は武力の行使は、国際紛争を解決する手段としては、永久にこ を放棄する。
In order to accomplish the aim of the preceding paragraph, land, sea, and air forces, as well as other war potential, will never be maintained. The right of belligerency of the state will not be recognized.
二 前項の目的を達するため、陸海空軍その他の戦力は、これを保持しない。国の交戦権 、これを認めない。

Here's the short version: Japan's Anti-Terrorism Law, passed in the wake of 9/11, empowers the SDF to provide logistical non-combatant support to Operation Enduring Freedom AKA the anti-terrorism efforts in Afghanistan. They are doing so by providing fuel to the multi-national naval flotilla that is engaged in an interdiction mission near the landlocked nation to ensure that Osama Bin Laden doesn't sneak out of the subcontinent in a zodiac or something like that.

The MSDF has pumped a lot of gas, much of it into supply ships belonging to other nations, which then went on to refuel combat ships belonging to those other nations. Japan is so scrupulous in observing the constitution that it will not permit the fighting ships of other nation to guard its tanker while it refuels other ships, which is why Japan has also sent a destroyer as part of the flotilla, which is only allowed to guard the other Japanese ships from the non-existent naval threat from landlocked Afghanistan. The thing is, one of the US supply ships "may have" gone on to refuel the aircraft carrier USS Kitty Hawk which then went on to engage in the early stages of the War in Iraq.

Forget for a moment that Japan sent non-combat troops to Iraq for a couple of years to show its loyalty to the United States to provide reconstruction aid in Southern Iraq under the (one-way) protection of the Dutch and later Australians and British. Apparently pumping gas for war is a no-no.

Now, I know what you are saying to yourself: "Aren't the MSDF pumpng gas for war in Afghanistan?" After all, Canada is part of that multinational naval flotilla in addition to having ground troops fighting and dying in Afghanistan--isn't there a war on there? Isn't Operation Enduring Freedom the Pentagon's name for the the War on Terror in Afghanistan? Isn't the civilized world at war with Al-Qaida and the Taliban?

Not according to the people I work for. As it was explained to me, the MSDF cannot take part in a war and since the MSDF is taking part in the international action against terrorism in Afghanistan, it cannot be a war.

Which bring us back to our title and the reason for my two little travelling companions on the train ride home.
Posted by Unknown at 07:25 Recommend this Post