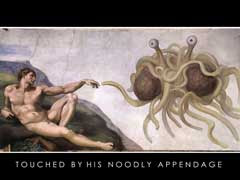 What's the second largest active religious group on the campus of Missouri State University? Well, that would be the MSU chapter of The Church of The Flying Spaghetti Monster.

The national "Church of the Flying Spaghetti Monster" has a local chapter at MSU, and it's sending a strong message to students on campus.It’s the second-largest religious group on Missouri State's campus, with more than 200 members, including MSU staff.

"For the people that are not heavily into a religion it feels like a real welcome movement because here on campus there's a lot of people who are very confused on what they believe and on what they want to do."

The Church of the Flying Spaghetti Monster began just a few years ago with only a handful of members and now its grown dramatically.

And of course these Pastafarians stay true to the church's doctrine on climate change.

Many members of the organization believe that global warming, earthquakes, hurricanes and other natural disasters are a direct effect of the shrinking number of pirates since the 18-hundreds.

Which is why everyone should fly a Jolly Roger from their car antennae and talk like a pirate at least once a month.

And although it gets a lot of support from both students and faculty, the group does get threatening letters and hate mail delivered to its members.

If I have to tell you where and who that comes from you may not have been paying close enough attention in the past, however, here are some examples direct from the Great Pasta Pot.
Posted by Dave at 13:01 Recommend this Post