Channeling JFK with "little cakes for you" 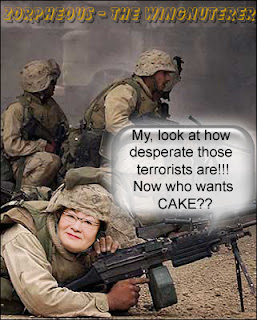 WTF is he on about now?
Canadians don't need to ask the Afghan government what it is doing for us in Canada.
We already know what the Afghan government is doing for us in Canada.
Without Afghan PM Karzai's little reciprocal staged photo ops, there'd be no opportunity at all for Steve to play Crusader Bunnypants Jr "on the world stage", as he likes to call it.

Bernier was upbeat : "The territory is more secure now today, here in Kandahar than it was a year ago."
The UN was not : "The security situation in Afghanistan is assessed by most analysts as having deteriorated at a constant rate through 2007," stated their August report, adding that their own assessment of a 25% increase in violent attacks is likely to be a conservative one.

The egregious new International Development Minister Bev Oda was also along for the ride, "handing out sweets to soldiers and posing beside military vehicles."
G&M : "Yesterday's tour by the Conservative cabinet ministers included at least 13 photo opportunities. During a trip to a forward base, Ms. Oda stood in front of a concrete building scarred by shrapnel from Taliban mortars and offered a box of chocolate treats to the soldiers.
"Thank you for your work," she said, "and little cakes for you."

Yeah, it's little cakes all round. I think I'm gonna be sick.

Cross-posted at Creekside
Posted by Alison at 07:45 Recommend this Post