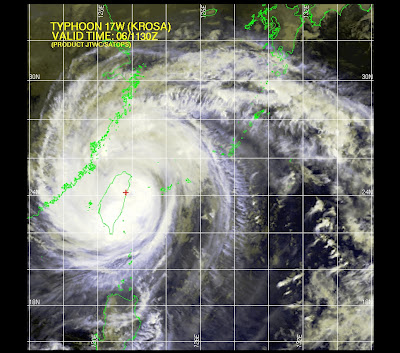 Waist-high flooding was reported all over low-lying areas of Taiwan and specific areas had rooftops blown off. Mudslides and rockslides were reported in many areas. At least two people have been killed an dozens injured.

Krosa is now below Super Typhoon status with winds of 125 knots/144 mph/232 kmh. It is moving northwest at about 11 knots/13 mph/20 kmh. There has been some deterioration of the eyewall as Krosa moves over land, however the size of this system will continue to cause damage and drop heavy rains over a wide path.

This system is expected to hit mainland China Sunday evening or Monday morning. Areas as far north as Shanghai are already being affected by the wide area of this cyclone.
Posted by Dave at 08:09 Recommend this Post